Author Nick Nolan’s new memoir, “No Place Like Home: Coping with the Decline and Death of Toxic Parents” weaves the author’s story of his violent father’s decline and death within clinical perspectives on the anger and resentment felt by adult children of aging parents who were wounding, absent, narcissistic, or traumatic. 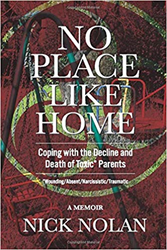 I wrote NO PLACE LIKE HOME to offer assistance to those who’re aiding aging parents who neglected or abused them when they were at their most vulnerable.

"No Place Like Home: Coping with the Decline and Death of Toxic Parents" is the latest release by best-selling, multi-award-winning author, Nick Nolan. "No Place Like Home" presents Nolan’s own heartrending narrative among clinical viewpoints on an issue facing many people today: How does one cope with the decline and death of a parent who was abusive, neglectful, or uncaring?

In groundbreaking fashion, Nolan combines a candid, expressive memoir within a powerful self-help guide, weaving his own parents’ abuses and declines amongst interviews with eight licensed clinicians specializing in family systems, women’s issues, People of Color, Christianity, LGBT issues, and neurology. The topics discussed include child physical and sexual abuse, Chronic Traumatic Encephalopathy (CTE, or Concussion Syndrome), PTSD, narcissism, and eating disorders, all relayed in an easy-to-read, conversational style. Nolan also adds the very personal stories of three adult survivors of prolonged child abuse: “The interviews I conducted with these victims aren’t just about surviving with a wounded heart,” says Nick, “but about thriving.”

Nolan said his inspiration for the book was driven by the need to elucidate the familial traumas of probable CTE, and to assist others – to help them find peace, healing, and the reassurance that people with histories like his are not alone. “I wrote 'No Place Like Home' to offer assistance to those who’re aiding aging parents who neglected or abused them when they were at their most vulnerable. Ultimately, I’m hoping my readers will find solace in the perspectives of others who’ve maintained – and helped others maintain - their emotional sanity while dealing with the seemingly endless demands of a declining, toxic parent.”

Early reviews are applauding "No Place Like Home" for its originality, boldness, and authenticity. Reader Views noted, “No Place Like Home is a first-rate production. I particularly like the way the book is presented – it’s not a “do this for 30 days and you’ll be cured” type of self-help book, rather it’s a journey of exploration and discovery as Nick Nolan integrates his personal story into the guidance provided through his interviews. It feels like a one-on-one experience with a panel of experts guiding the way.”

"No Place Like Home: Coping with the Decline and Death of Toxic Parents" (ISBN 9781073692750, Little Eden Press 2019) can be purchased through local and online bookstores. For more information about Nick Nolan and his work, please visit his website at http://www.nick-nolan.com. You can also connect with him on Facebook at Nick Nolan Author: No Place Like Home and on Instagram at NickNolan_NoPlaceLikeHome.

A native of Los Angeles, Nick Nolan began building a life with his husband Jaime in 1987. Inspired by the works of author Paul Monette, Nick began the five-time award-winning trilogy Tales From Ballena Beach: "Strings Attached," "Double Bound" and "Wide Asleep." Nolan's "Black as Snow" became the #1 Amazon Kindle Bestseller in the United Kingdom and #12 in the USA following its release in 2011 and was subsequently translated into the German thriller "Prophetengift." His newest work "No Place Like Home: Coping with the Decline and Death of Toxic Parents" breaks new ground in the self-help genre by weaving the memoir of his violent father’s death from probable Chronic Traumatic Encephalopathy (Concussion Syndrome) within helpful clinical perspectives. Today Nick and Jaime - a Creative Director - and their two retrievers divide their time between a home in the San Fernando Valley and a mountaintop cabin.