Seth Godin Points to Death of Traditional Publishing, We Listen and Publish Our Own Way: With Socks

Crafting-a-Life, Inc. continues its tradition of weaving craftwork and literature together with the release of its first book, a young adult novel that combines romance, psychic powers, and knitting. The release is accompanied by the roll out of a series of sock patterns based on the main characters from the novel “Grounded” The Seven series, book 1. 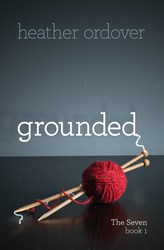 When Seth Godin makes a case for why bookstores and traditional publishing are dying—if not dead—writers and book lovers pay attention, then they publish books through their own online shops.

When Seth Godin makes a case for why bookstores and traditional publishing are dying—if not dead—writers and book lovers pay attention, then publish books through their own online shops. Now Heather Ordover, the host of CraftLit® and editor behind What Would Madame Defarge Knit?® And What (else) Would Madame Defarge Knit? (and the pending "Defarge Does Shakespeare"), brings you the first in a new YA series about a group of psychic teens in Brooklyn in the early part of this millennium.

The official release of the new novel, "Grounded: The Seven" book 1, on October 1, 2013, is accompanied by a set of eight sock patterns for knitters. “The main character is a knitter,” Ordover says, “and her knitting matters to the plot of the book, so the socks were an easy fit.” Similar to the concept behind the Defarge books, these patterns are inspired by the seven main characters in the novel (plus a bonus pattern). Dyer and designer Meg Warren has created five of the eight socks. “The teen characters in this book were fun to design for because like most teenagers, they are much more complicated than you think when you first meet them. Some seem very straightforward but have a darker side... one seems unaccomplished but is harboring a mixed bag of secrets ... and one seems dark at the beginning but it only masks his need to find the one person who can accept and understand him. Some sock designs are easy and some are complicated but all of them are fun to knit!” says Warren. Growing up is tough under the best of circumstances, but it’s made much harder for the novel’s main character when she can accidentally light your ex-boyfriend on fire—from 15 feet away.

While the novel is officially released October 1 with the first pattern (Rosie's Firestarter socks), the rest of the patterns will be rolled out every 2–3 weeks thereafter until they are all available as individual patterns and as a unified eBook. “This gives folks a chance to knit one pair before they start the next,” Ordover says.

The yarn for the sample socks has been provided by, and will be sold in kit form by, Riin Gill of Happy Fuzzy Yarn. Each sock color-way was specifically chosen to represent aspects of the character so Izzy, a girl with spiky blue hair and a bouncing personality, uses the kicky Cobalt color-way. "Socks can be knit with any regular sock yarn," Ordover says. "These are just colors and yarns that we particularly liked."

For additional information on "Grounded," the "What Would Madame Defarge Knit?" books, or for a sample copy of the novel for review purposes, contact Heather Ordover or visit http://www.crafting-a-life.com.

Crafting-a-Life, Inc. and its imprint Crafting-a-Life Books specializes in media and Audiobooks-With-Benefits™—treating literature and history with a light touch and serious enthusiasm.