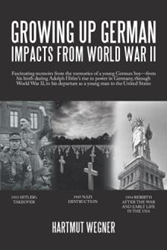 Hartmut Wegner was born in 1933 near Berlin, Germany, the same year Adolf Hitler took control and built the country into a strong economic and military stronghold. In “Growing Up German: Impacts from World War II” (published by iUniverse), Wegner shares his story from the viewpoint of a young boy growing up under the Nazi regime. For more details about the book, please visit https://www.amazon.com/Growing-Up-German-Impacts-World/dp/1532049099.

This memoir follows Wegner from the beginning of World War II in 1939 when the Nazis and Adolf Hitler started their march to conquer the world through to the war’s end in 1945 and the recovery afterward. It also follows his teenage years in Berlin and then to his immigration with his family to the United States in 1954 at age 20. Wegner narrates the numerous shocking experiences that had an emotional impact on his young life. In addition to sharing his recollections, Wegner offers his opinions on World War II from his perspective later in life.

“Many people still like to be instructed about World War II events,” Wegner says. “This book may fascinate people because it is written from the memories of a young Berlin boy who described in chronological terms the many episodes, he experienced during World War II and after.”

Offering a straightforward firsthand account of the events in Germany during World War II, “Growing Up German: Impacts from World War II” gives keen insight into what life was like for one boy and his family during a tumultuous and tragic time in world history.

About the Author
Hartmut Wegner was born in Woltersdorf near Berlin, Germany. He grew up under the Nazi regime. He immigrated to the United States in 1954. He got an education, raised a family and traveled the world.