23-year old Bruno Valverde is one of the rising stars of modern drummers. Already sporting a hefty resume, he has played with Brazilian musical heavyweights such as Kiko Loureiro, Felipe Andreoli, Edu Falaschi, Germán Pascual, André Leite, and many more. 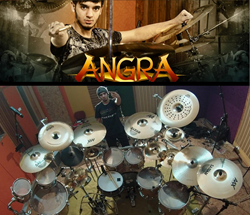 “The Club Bag is a lifesaver! Now I do not need to bring 4 backpacks to carry all my equipment to my gigs! The ingenuity of the compartments allow me to fit everything in one bag!”

Bruno has also been gaining international notoriety; in January of 2014, Bruno went on a US tour with the Kiko Loureiro Trio. The trio played in 7 states; January 4th to 14th in New York, Rhode Island, North Carolina, Pennsylvania, Tenessee, and Virginia. Bruno also attended the NAMM 2014 Show representing Markdrum, Gruv Gear and Pearl Drums—he performed with bassists Anthony Crawford and Federico Malaman, and with guitarist Leonardo Guzman at the Gruv Gear stand and the performance was very well-received by the public. His interviews can be read on websites such as Groove Portal (Italy) and Sick Drummer Magazine, and his videos have been featured on the sites like Thunder Drummer, Drum! Magazine, and Drum Channel.

Most recently, Bruno took the reign as the new drummer for Brazilian super-metal band ANGRA. He will be going on a European tour with the band beginning June 19th, and they will record their new album in Sweden in July. Bruno will also be featured in the new album for Italian fusion-guitarist Fabrizio Bicio Leo. The highly anticipated album is expected to be released in mid-June.

Bruno's style mixes influences from Progressive Rock, Jazz Fusion and Brazilian music. The drummer is also known for applying the traditional-grip technique in Metal to wield the sticks.

Bruno proudly endorses the Club Bag from Gruv Gear. Bruno shares, “The Club Bag is a lifesaver! Now I do not need to bring 4 backpacks to carry all my equipment to my gigs! The ingenuity of the compartments allow me to fit everything in one bag!”

Below are the Angra European Tour Dates with Bruno and the press release for the upcoming album with Fabrizio Bicio Leo.

Fabrizio Bicio Leo will release his 3rd CD through jellybeard records in June 2014. Here's a preview of one of the 14 tracks that will appear on "Spectrum Of My Past" called "Thirty Nights Fever" with Flavio Scopaz on bass, Alex Argento on keys, mixing & mastering, and Bruno Valverde on drums:

Learn more about Bruno by visiting his artist profile page at http://www.gruvgear.com/endorsers/bruno-valverde.

About Gruv Gear
Gruv Gear exists to bring innovative and well-thought out products to creative professionals and beyond, including career musicians, DJs, photographers, filmmakers, mobile producers and more. We are on-track not only to become a premium lifestyle accessories brand in the Music/DJ and Photo Industries, which is a small fraction of our potential market, but also expand to a broader range of industries that will increase our global footprint exponentially. To date, Gruv Gear products are sold in 5 continents and shipped directly to adoring fans worldwide.