Harding Steinbrenner Racing announced that energy service company GESS International will be the primary sponsor of the team’s No. 88 Honda-powered Indy car for this weekend’s race as well as an associate sponsor at the following week’s round in Long Beach. 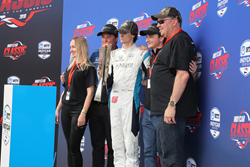 “Now is perfect timing for GESS International, the largest and fastest growing biogas company, to be working with the fastest driver and growing team of Colton Herta and Harding Steinbrenner Racing,” said Shaun Lee of GESS International.

GESS International is joining Harding Steinbrenner Racing as primary sponsor of the #88 Honda-powered Indy car for this weekend’s Honda Indy Grand Prix of Alabama and as an associate sponsor of the Acura Grand Prix of Long Beach. An energy service company with twenty-one years of energy efficiency and renewable energy experience, Gess International hopes to continue Colton Herta’s winning momentum following his first-place finish at the Circuit of the Americas in the INDYCAR Classic.

“Now is perfect timing for GESS International, the largest and fastest growing biogas company, to be working with the fastest driver and growing team of Colton Herta and Harding Steinbrenner Racing,” said Shaun Lee of GESS International. “Coming off the win at COTA, we’re ready for more edge-of-your-seat racing and connecting IndyCar fans to the benefits of renewable fuels.”

“We’re thrilled that GESS International is joining Harding Steinbrenner Racing at Barber Motorsports Park,” said Mike Harding. “I truly believe they are making a difference in the biogas community and know they will make a difference in the INDYCAR community too. Very excited to see what we can do at the Honda Indy Grand Prix of Alabama with GESS International on our car.”

“We are excited to have GESS International as our primary sponsor for the Honda Indy Grand Prix of Alabama,” said George Michael Steinbrenner. “Biofuel is a growing industry, and GESS International has expressed great interest in getting involved in motor racing.”

About GESS International North Carolina, Inc.
GESS International North Carolina, Inc. is a Headquarter of GESS group of companies (GESS) located worldwide with offices in London, Ukraine, and throughout the United States. With over 350 completed projects worldwide, GESS has over 21 years of expertise in providing energy efficient solutions using co-generation and renewable energy resources such as solar and biogas for the private sector, budgetary organizations, and business. From consulting to managing operations of our completed projects, GESS offers design and implementation solutions with a direct economic impact for its partners, customers and their communities.

About Colton Herta
Colton Herta began racing go-karts at the age of four. At 12, he turned to cars and promptly won the Pacific F1600 Series championship and finished second in the Skip Barber Summer Series. At 16 years old, the Valencia, California, native quickly impressed by winning the second race of the Indy Lights Presented by Cooper Tires Championship 2017 season. That year he also led the series with seven pole positions, set five new track records and earned Rookie of the Year honors. Most recently, Herta won the Rolex 24 Hours IMSA race with the Rahal Letterman Racing team and placed second in the Indy Lights Presented by Cooper Tires Championship with four wins, three pole positions and 13 podium finishes.