Author H.D. Stopschinski has written down a highly detailed account of the many harrowing experiences he and his family lived through. 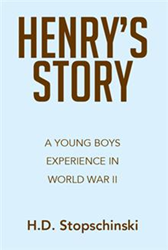 This engrossing story captures the realities of war, the death and the injustices committed on both sides

In the history of the human race, there are few wars that can match the sheer scale and brutality of the Second World War. And to have lived through such times means that any moment could have been one’s last. In “HENRY’S STORY,” author H.D. Stopschinski writes down an incredibly detailed account of his life during the Second World War.

“HENRY’S STORY” is the story of a 14-year-old boy during the last month of World War II. It tells of his family’s flight from the invading Russian Army that started in a small town in the former Free State of Danzig and ended in a small village near Hanover; a flight that began by horse-drawn wagon trying to cross the Weichsel river to out-run the Russian steamroller and culminated into a 9-month odyssey to freedom. This highly engrossing story shows a young boy’s incredible courage in the face of capture and death.

This engrossing story captures the realities of war, the death and the injustices committed on both sides. It also shows how war destroys lives and that ultimately there are no winners when it comes to war. “HENRY’S STORY” is a masterfully written story of courage and survival.

About the Author
H.D. Stopschinski was born in 1930 in a small town in the territory of the former free state of Danzig. His life changed when he was 9; World War II started practically at their back door. Years of living under the rule of Adolph Hitler followed. In January 1945, the Russian army was closing in and permission to evacuate was granted by the German political party. After traveling by horse-drawn wagon for ten days, a miracle happened and he and his family were able to catch a freight train filled with refugees heading west. After nearly a nine-month odyssey, they arrive at their final destination and and were reunited with the part of their family that were able to out-run the Russian steamroller. He and his family were soon classified as Refugees, as people that came out with nothing and did not fit into the remaining establishment.