Data released today as part of a first-of-a-kind study confirms that more than 3.3 million people in Illinois could be impacted by permanent punishments as a result of criminal legal system involvement given the well-documented inequities that bring into question whether the system actually brings justice to people who come into contact with it. "Never Fully Free: The Scale and Impact of Permanent Punishments on People with Criminal Records in Illinois" illustrates the dramatic number of people who may be living with the stigma and limitations of a criminal record in Illinois. Since the advent of mass incarceration in 1979, there are an estimated 3.3 million adults who have been arrested or convicted of a crime in Illinois. Under current laws, these individuals have limited rights even after their criminal legal system involvement has ended. In fact, the report uncovered a vast web of 1,189 laws in Illinois that punish people with criminal records, often indefinitely. 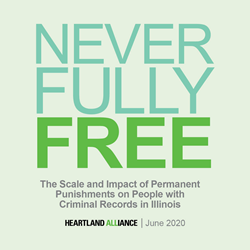 “Especially after we've just commemorated the liberation of enslaved Black people in the U.S. on Juneteenth & are on the cusp of celebrating the 4th of July, we must reckon with the fact that we still have not achieved true freedom for millionsin our communities.” Katie Buitrago Director of Research

See http://www.heartlandalliance.org/neverfullyfree for the full report.