“Hell on the Border” releases to public audiences Dec. 13

Hell on the Border is a Western thriller set in 1875 and is based on the true story of the legendary Bass Reeves, the first black U.S. marshal west of the Mississippi River. The film is written and directed by Wes Miller and releasing to worldwide audiences on Friday, December 13. It is produced and released by Soulidifly Productions in partnership with Lionsgate and Sweet Unknown Studios. 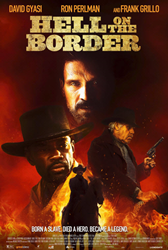 Hell on the Border poster

“Bass Reeves is an American hero that history overlooked,” says Wes Miller, writer and director. “I wanted to tell his story of triumph in the face of naysayers and overcoming incredible odds. There’s so much more to Bass’ life. We hope to continue to bring his stories to the world.”

Soulidifly Productions, a film company with a mission to produce meaningful, uplifting stories that are entertaining and beautifully told, has partnered with Lionsgate and Sweet Unknown Studios to produce and release Hell on the Border in select theaters, as well as to audiences worldwide through Video-on-Demand (VOD) on all platforms (soulidifly.com/hell-on-the-border) and Blu-ray starting Dec. 13, 2019.

Set to hit select theaters on Dec. 13, Hell on the Border is a western thriller set in 1875 and based on the true story of the legendary Bass Reeves (David Gyasi), the first black deputy U.S. marshal west of the Mississippi River. Having escaped from slavery after the Civil War, Bass Reeves arrives in Arkansas seeking a job with the law. To prove himself, he must hunt down a deadly outlaw (Frank Grillo) with the help of a grizzled journeyman (Ron Perlman). As he chases the criminal deeper into the Cherokee Nation, Reeves must not only dodge bullets, but severe discrimination in hopes of earning his star – and cement his place as a cowboy legend. After being entrusted by Judge Issac C. Parker as a badge-wearing U.S. Marshal, Reeves worked mostly in Fort Smith, Arkansas, and later worked as a police officer in Muskogee, Oklahoma. He was credited with arresting more than 3,000 felons. He shot and killed 14 outlaws in self-defense.

“Bass Reeves is an American hero that history overlooked,” says Wes Miller, writer and director, Hell on the Border. “I wanted to tell his story of triumph in the face of naysayers and overcoming incredible odds, like we still face today. There’s so much more to Bass’ life. This is an origin story of sorts, and we hope to continue to bring his stories to the world.”

BK Fulton, founding CEO of Soulidifly Productions, noted that Bass’ arrest record and the stories of his legendary career became the basis for the fictional character the Lone Ranger. “I grew up watching the Lone Ranger and I am honored to be able to bring the underlying story to the big screen,” said Fulton.

The film was given a red-carpet reception on Nov. 15 in Muskogee, Oklahoma (where Bass Reeves was laid to rest), at the Three Rivers Museum, followed by a world-premiere screening at the historic Roxy Theater.

Soulidifly films have been official selections in over 15 film festivals and have earned several awards including 2nd place at the Urban World Film Festival, the Oscar Micheaux Award for filmmaking, and 1st Place in the LA Film Festival. Distributors for Soulidifly films include Cinedigm, Gravitas Ventures and Lionsgate, among others.

Hell on the Border: Review quotes
World Premiere Audience Member:
“Not since Rooster Cogburn’s portrayal of a US Marshal has there been a more exciting adventure packed movie. Not only is the story based on actual exploits of a real US marshal, but Bass Reeves had not only vicious outlaws of Indian Territory but he had to fight vicious racism on both side of the Arkansas River. Definitely a must-see movie!”

Times Record (Fort Smith, Arkansas), Nov. 10, 2019:
"After the film’s first few scenes, Gyasi becomes magnetic as Reeves, sliding into the role of a man whose exterior is quiet, calm and strong. Reeves is depicted as an individual who takes his job seriously, but one who also makes time to be a source of support and love for his wife, played extremely well by Jaqueline Fleming, and their young children."

"There’s plenty of gun-drawing action in the film, but Miller also leaves ample time for the trio of actors — and the audience — to experience character development. By including some backstory to Grillo’s character, Miller has made the arrogant villain more than a cardboard cut-out. There are reasons behind Dozier’s words and motives, and Grillo was granted quite a bit of screen time to metaphorically dig into his character."

"Almost right from the beginning, Perlman’s character provides subtle waves of comedic relief — the fact that his character isn’t trying to be humorous makes the lighter touches in “Hell on the Border” more enjoyable — and Amber Sweet is commanding without stooping to in-your-face tactics in a small-but-pivotal role as the infamous outlaw, Belle Starr. Rarely blinking and refusing to smile during her scenes, Sweet is believable as the real-life Starr, who was said to be fearless while she associated with notorious outlaws like Cole Younger, and brothers Frank and Jesse James.”