CCAT, CHFCC and NEESC led briefing on the technical and economic viability of hydrogen and fuel cell technology at legislative forum. 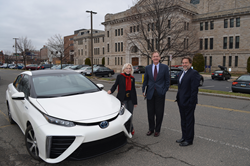 We are investing in technology research to make energy cleaner, cheaper, and more reliable not only for the state but for the global energy market.

The event, held April 9 in Hartford, was part of an Informational Forum sponsored by the Energy and Technology Committee, co-chaired by State Senator Paul Doyle and State Representative Lonnie Reed. After the briefing, legislators had an opportunity to experience riding in Toyota and Hyundai “zero emission” fuel cell electric vehicles during a “Ride and Drive.”

Stated Representative Reed, “We have some key players here including major auto companies, which have significant research and development budgets. And we have the ability to pull public and private financing together and we have people who are providing the fuel. It feels like we’re almost there.”

“This is a manufacturing industry cluster based in Connecticut that makes clean energy technology for export,” commented Joel Rinebold, energy director, CCAT, who helped organize the briefing to educate legislators about the importance of the industry for job creation and meeting emissions standards.

“We are investing in technology research to make energy cleaner, cheaper, and more reliable not only for the state but for the global energy market,” said Rinebold.

“In Connecticut, there are about 1,000 people working directly in the industry, representing about 28 percent of the sector jobs in the U.S. and nearly 8 percent of the global employment in the field,” said Harrity.

Eight states including Connecticut have signed a Zero Emission Vehicle Memorandum of Understanding that sets a goal to place 3.3 million ZEVs on the road by 2025.

About CCAT
Connecticut Center for Advanced Technology, Inc. (CCAT), a nonprofit economic development organization headquartered in East Hartford, Conn., is a leader and go-to resource for strengthening competitiveness and high-tech business development in the state, region and nation. CCAT focuses on three core areas: technology, efficiencies and workforce development, with expertise in manufacturing technology, IT, education and workforce strategies, and energy solutions. Through the synergy of its experienced teams, advanced technologies and extensive partnerships, CCAT provides manufacturers, educators, government, nonprofits and entrepreneurs with innovative solutions to tackle economic challenges, compete and succeed.

About CHFCC
Connecticut Hydrogen-Fuel Cell Coalition (CHFCC) administered by the Connecticut Center for Advanced Technology, Inc. (CCAT) and supported by the CT Department of Economic and Community Development, is comprised of representatives from Connecticut’s fuel cell and hydrogen industry, labor, academia, government, and other stakeholders. The Connecticut Hydrogen-Fuel Cell Coalition works to enhance economic growth in Connecticut through the development, manufacture, and deployment of fuel cell and hydrogen technologies and associated fueling systems.

About NEESC
Northeast Electrochemical Energy Storage Cluster (NEESC) is a federally recognized cluster supported by the United States Small Business Administration. The cluster, administered by the Connecticut Center for Advanced Technology, Inc. (CCAT), assists the hydrogen and fuel cell industry in the eight state Northeast region with education, outreach, and technical support. The goal of the cluster is to drive economic development, innovation, and job creation in the nation’s increasingly important clean energy sector.