Horrifying Report Uncovers Disturbing Evil on the Internet - The Hater Next Door: Online Incitement Against Minorities in America

This joint report from MEMRI and the Lantos Foundation exposes the online hatred against minorities that is thriving within our own borders,very often in our own communities and neighborhoods. Unlike years past, these haters next door can use the Internet to hide behind fringe websites and online personas while they express their darkest impulses and inspire others to further their radical goals. 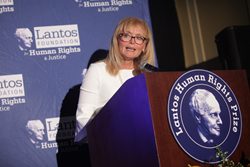 We encourage leaders in the media, policy, and technology spaces to join us in recognizing, exposing, and confronting these age old evils in their modern day forms.

Today, the Lantos Foundation and the Middle East Media Institute (MEMRI) published a report entitled The Hater Next Door: Online Incitement Against Minorities in America. This truly horrifying report examines online hatred and incitement in the United States between November 2018 and February 2019 against minority communities including Jews, People of Color, LGBTQ and others.

The report exposes the vicious reality of online hatred that is thriving within our own borders, fueled by neo-Nazis, white supremacists, racists and fascists that are not only fellow Americans, but are very often members of our own communities. Unlike generations past, these haters next door can easily hide behind fringe websites and online personas while indulging their most vile impulses with the miracle of the modern Internet. This exponential threat is multiplied when the means for further hate and incitement rests neatly at one’s fingertips via their phone or laptop.

“This report shines a very bright light on the hatred that lurks right in own backyard. As a nation, we must confront and expose this evil in order to prevent future tragedies; so many recent mass tragedies, like the mosques in New Zealand or the Tree of Life synagogue in Pittsburgh, start online well before any shots are taken. By exposing these Haters Next Door, we seek to empower digital first-responders to take timely action to save lives,” said Lantos Foundation President, Katrina Lantos Swett. “We encourage leaders in the media, policy, and technology spaces to join us in recognizing, exposing, and confronting these age old evils in their modern day forms.”

The report can be found at https://www.lantosfoundation.org/thehaternextdoor

The Lantos Foundation for Human Rights and Justice was established in 2008 to further the legacy of Tom Lantos, the only Holocaust survivor ever to serve in Congress. In addition to his service as Chairman of the House Foreign Affairs Committee and Founder of the Congressional Human Rights Caucus, Tom Lantos will be long remembered for his profound moral convictions and his deep commitment to human rights. We focus our work on four pillars that represent the major themes of Tom’s work: Religious Freedom, Rule of Law, Global Citizenship and the Lantos Legacy.