Hotrod Story Fires On All Eight Cylinders in New Audiobook

Author Charles S. Clark Squeals Through the Twists & Turns of Publishing to Capture Die-Hard Hotrod Readership. New Audible audio book takes listeners into the private world of a mechanical genius as the tense story rockets down the road. 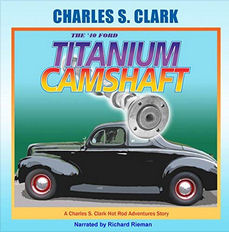 While driving coast to coast and border to border twice in one year, I had plenty of time to think about some crazy adventures that one might get into with an old hot rod car.

Author Charles S. Clark is a well-known Hot Rod aficionado whose many adventures have spilled over into his adventure-writing. His first book, The Bootlegger ‘40 Ford, captured an avid readership who began clamoring for more. To satisfy them—and his own insatiable appetite for the special world of classic automobiles—he took himself, and his readers, into the special world of the creator of a car part that would make the difference in a special car’s performance.

The ‘40 Ford Titanium Camshaft – just released on Audible -- is his first short fiction, cleverly designed as a prequel to his rip-roaring series of adventures chronicled in Bootlegger ‘40 Ford. Every car is an assembly of carefully designed parts that must work in harmony to achieve speed, safety, aerodynamics, economy, precision handling and most importantly reliability. Clark is a master restorer—as his recent blog illustrates so well.
http://charlesclarkauthor.com/car-restorers-7-syndromes/

But in this story, he takes the car not only back to its nuts and bolts, but back to the actual drawing board, as his character Jerry imagines an entirely new kind of camshaft. “It’s like he created a boy who builds a new heart,” said one reader. “And then it beats at the center of the story until the car seems to come alive. I’d never read anything like it!”

“While driving coast to coast and border to border twice in one year,” the author recalled, “I had plenty of time to think about some crazy adventures that one might get into with an old hot rod car. I have a lot of friends that participate in the “old car” hobby. I thought to myself, “Wouldn’t it be fun to write some stories and include them? After all, they love hot rods, restored classic cars, bootleggers, 40 Fords and wild stories.”

The new audio book was produced and narrated by Richard Rieman, an Audible Approved Audiobook narrator, and author of The Author’s Guide to AudioBook Creation.
https://www.amazon.com/Authors-Guide-AudioBook-Creation/dp/0997100206
Richard’s warm voice as well as his gift for accents, help bring the story to life so vividly, listeners were feel they’re either at the engineer’s drafting table, or in the diver’s seat of an extraordinary car.

“Titanium Camshaft is much more than a book and audiobook for classic car lovers,” Richard noted. “The characters are fun, and their adventure is full of wonder, not just just gasoline and rocket fuel fumes.” Rieman also narrated the novel "The Bootlegger '40 Ford" that takes follows the "Titanium" story.

Author Charles S. Clark is available to speak at Colorado automobile clubs and available by phone for radio and print interviews nationally.

“I’m at the Eastern National LCOC Meet and just finished your book last night. Wanted to let you know I THOROUGHLY enjoyed it! I have a list of people I am passing it on to, starting with LCOC President Talbourdet. Thanks again,“
– Steve D’Ambrosia, LCOC National Chief Judge

“Thank you for sending me your book, The Bootlegger ’40 Ford. I really enjoyed each chapter and appreciate the detail and story lines.”
– Ray Everham, Three time Winston Cup champion with driver Jeff Gordon

Find our more about the author http://www.charlesclarkauthor.com