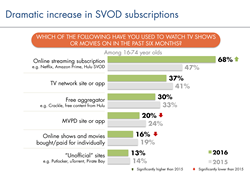 The ‘all you can eat’ model of SVOD platforms is emerging as a clear favorite.

Over the past few years, predicting the future of television has involved more questions than answers. But new data from Hub’s annual “What’s TV Worth” study suggests we’re close to an answer to at least one critical question: How will tomorrow’s TV viewers want their content delivered?

Consistent with this general increase in SVOD subscription, Netflix in particular is now considered an even stronger value than services that allow consumers to watch TV content for free.

“Consumers have accepted the idea that online TV services are worth paying for on a monthly basis,” said Peter Fondulas, principal at Hub and one of the authors of the study. “These findings show that subscription services like Netflix and Amazon are attracting more and more viewers with a combination of attractive features: deep catalog, growing numbers of original series, an intuitive interface, and a transparent log-in process.”

“Many in the industry have said that the appetite for TV content is enough to support lots of providers, and these findings suggest that they’re correct,” said Jon Giegengack from Hub. “The ‘all you can eat’ model of SVOD platforms is emerging as a clear favorite. And the fact that most SVOD subscribers use more than one SVOD platform is a telling development.”

About this Research
“2016: What’s TV Worth” is an annual tracking study among 1,502 US consumers with broadband, who watch at least 5 hours of TV per week. Hub has conducted this study since 2013. An excerpt and infographic of the report are available as a free download from Hub Entertainment Research. The current wave of the study was conducted in April 2016.

About Hub Entertainment Research
Hub Entertainment Research is a market-research firm with deep expertise in television, movie, videogames, music, publishing, and sports—anywhere that entertainment and new technology overlap. In the television industry, Hub analysts work with networks, content producers, MSOs, and digital distributors. Our job is to help our clients understand the greatest risks and most-promising opportunities facing their companies and to reveal the clearest paths to success in a changing marketplace. For more information, please visit us at http://hubresearchllc.com/reports/