On July 18th, Jeff Zelaya was an invited guest on the HuffPost Live segment discussing how men who lacked a father figure growing up, prepare for and handle their own roles as fathers. A discussion based on a recent Huffington Post story about Jay-Z addressing these issues on his new album. 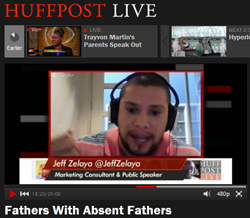 "As I held my son for the very first time and felt an overwhelming love for this human being in my arms, in the back of mind I thought about my father and instead of feeling angry or resentful, I felt gratitude." - Jeff Zelaya

The Associate Producer of the HuffPost Live reached out to Jeff Zelaya after reading his blog post: “Why growing up without a dad was the best thing to happen to me!”. The blog post touches upon Jeff Zelaya’s recent experience in becoming a first time father and went viral garnering hundreds of shares, likes and interactions.

This discussion was inspired by Pastor Michael W. Water’s, Huffington Post article “Jay-Z and the Misappropriation of Fatherhood”. Jay-Z's 12th studio album touches on the sensitive issue of becoming a parent despite never having a father figure. The question discussed was “Can fatherless fathers be great parents without having good examples to follow, or is it a never ending cycle?”

The segment has been recorded and can be watched here: http://huff.lv/110u93I.

About the HuffPost Live:
Huffpost live is a live streaming network that uses the HuffPost universe -- the stories, editors, reporters, bloggers, and community -- as its real-time script.