HUMAN Healthy Vending Ranks as the #1 Vending Company on Inc. 500 with Three-Year Sales Growth of 2,378%

HUMAN Healthy Vending has ranked as the No. 1 vending and automated retail company, No. 5 among food and beverage companies, No. 33 in California, No. 13 in the Los Angeles Metro Area and No. 168 overall on Inc. magazine’s 32nd annual “Inc. 500|5000,” an exclusive ranking of the nation's fastest-growing private companies. HUMAN now shares a pedigree with Intuit, Zappos, Under Armour, Microsoft, Jamba Juice, Timberland, Clif Bar, Pandora, Patagonia, Oracle and dozens of other notable recent alumni. 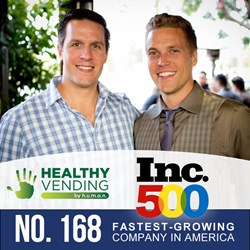 Our growth is a testament to our passionate employees and dedicated franchisees, as well as the changing tide of nutrition in America – we’re seeing a steady shift to more healthful eating across the entire country and we couldn’t be happier.

HUMAN Healthy Vending (http://www.healthyvending.com), the nation’s leading socially-responsible healthy vending franchisor, has been ranked as the No. 1 vending and automated retail company, No. 5 among food and beverage companies, No. 33 in California, No. 13 in the Los Angeles Metro Area and No. 168 overall on Inc. magazine’s 32nd annual “Inc. 500|5000,” an exclusive ranking of the nation's fastest-growing private companies. The list represents the most comprehensive look at the most important segment of the economy—America’s independent entrepreneurs. Companies such as Microsoft, Zappos, Intuit, Jamba Juice, Zipcar, Clif Bar, Vizio, Oracle, and many other well-known names, gained early exposure as members of the Inc. 500|5000.

HUMAN Healthy Vending is the first company to make the Inc 500 list whose primary industry is vending and automated retail.

HUMAN Healthy Vending has experienced an unprecedented growth of 2,378% in the past three years with over 100 healthy vending franchisees and nearly 2,000 healthy vending machines in the field at schools, YMCAs, hospitals, offices, gyms, community centers and government locations around the globe.

“We are honored to be included on the Inc. 500 list,” said Sean Kelly, CEO & Co-Founder of HUMAN Healthy Vending. “Our growth is a testament to our passionate employees and dedicated franchisees, as well as the changing tide of nutrition in America – we’re seeing a steady shift to more healthful eating across the entire country and we couldn’t be happier to be a part of this impactful public health movement.”

HUMAN Healthy Vending’s expansion has been bolstered by the increasing demand for healthful products in the school setting, especially with the USDA's recently-launched rules governing competitive foods called, “Smart Snacks In School,” which will affect what schools across the country may sell in their vending machines, student stores and a la carte lines. Additionally, corporations around the world are turning to healthy vending and healthy micro markets as part of their corporate wellness programs, with 91% of organizations now incorporating a health promotion plan for their employees (source: Hewitt Associates).

HUMAN’s network of franchisees and partner operators includes professional athletes, Special Forces military members, corporate executives, moms and dads, doctors, teachers and more. HUMAN Healthy Vending’s extended franchise family can be found carrying the torch of social entrepreneurship by placing healthy vending machines and micro markets across their communities and by hosting nutrition-focused sampling and education events at their local schools and community centers to educate consumers on the variety, impact and appeal of healthful foods.

The 2013 Inc. 500, unveiled in the September issue of Inc. (available on newsstands August 20 to November 20 and on Inc.com), is the most competitive crop in the list’s history. To make the cut, companies had to have achieved a staggering minimum of 918.59% in sales growth. The Inc. 500’ s aggregate revenue is $14.1 billion, with a median three-year growth of 1739 percent. The companies on this year's Inc. 500 employ more than 52,100 people and generated over 44,912 jobs in the past three years. Complete results of the Inc. 500|5000, including company profiles and an interactive database that can be sorted by industry, region, and other criteria, can be found at http://www.inc.com/500 .

"Not all the companies in the Inc. 500 | 5000 are in glamorous industries, but in their fields they are as famous as household name companies simply by virtue of being great at what they do. They are the hidden champions of job growth and innovation, the real muscle of the American economy,” says Inc. magazine editor, Eric Schurenberg.

The 2013 Inc. 500|5000 is ranked according to percentage revenue growth when comparing 2009 to 2012. To qualify, companies must have been founded and generating revenue by March 31, 2009. They had to be U.S.-based, privately held, for profit, and independent—not subsidiaries or divisions of other companies—as of December 31, 2012. (Since then, a number of companies on the list have gone public or been acquired.) The minimum revenue required for 2009 is $100,000; the minimum for 2012 is $2 million. As always, Inc. reserves the right to decline applicants for subjective reasons. Companies on the Inc. 500 are featured in Inc.’s September issue. They represent the top tier of the Inc. 5000, which can be found at http://www.inc.com/500 .

HUMAN Healthy Vending has been ranked by Entrepreneur as one of its “Top 100 Brilliant Companies” and by Forbes as one of “America’s Most Promising Companies” (two years in a row).

HUMAN donates 10% of profits to charities that fight the causes of childhood obesity and malnutrition, with a predominate recipient of those funds being HUMAN’s non-profit arm, HUMAN Everywhere.

Founded in 1979 and acquired in 2005 by Mansueto Ventures, Inc. is the only major brand dedicated exclusively to owners and managers of growing private companies, with the aim to deliver real solutions for today’s innovative company builders. Total monthly audience reach for the brand has grown significantly from 2,000,000 in 2010 to over 6,000,000 today. For more information, visit http://www.inc.com .

HUMAN Healthy Vending machines can be found in schools, hospitals, YMCAs, gyms and corporate locations around the world.