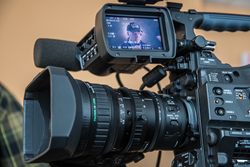 Korean War Veteran and US Air Force Staff Sergeant Albert Gibson was one of four veterans interviewed as part of an oral history project at Husson University's New England School of Communications.

While the Korean War ended in 1953 with the signing of an armistice, the aftermath of this armed conflict created a set of conditions that continues to challenge world peace.

Students in the New England School of Communications’ (NESCom) journalism program at Husson University interviewed four Korean War Era veterans as part of the Library of Congress’ Veterans History Project (VHP). The recorded interviews will be part of the Library’s permanent collection.

A news conference featuring four of the Korean War era veterans will be held at the Cole Land Transportation Museum, 405 Perry Road, Bangor, Maine at 10:00 a.m. on May 1. Members of the media are welcome to attend and learn more about the project. Veterans and participating students will be available for interviews.

“While the Korean War ended in 1953 with the signing of an armistice, the aftermath of this armed conflict created a set of conditions that continues to challenge world peace,” said Jeffrey Hope, an instructor in NESCom’s journalism program. “This project has provided journalism students with an opportunity to interview individuals who were a part of history. In addition to helping our journalism students refine their interviewing techniques; this experience has enriched their understanding of politics and a conflict that changed the world.”

The veterans were contacted through the Cole Land Transportation Museum where they serve as volunteers and help educate Maine students about their Korean War era experiences. This is the second time Husson has collaborated with museum Executive Director Jim Neville on creating veteran oral histories. The veterans were interviewed at Husson University’s New England School of Communications. Over the past two years, NESCom Journalism Program Coordinator and Instructor Jeffrey Hope and his students have submitted eight interviews to the Library of Congress’ Veterans History Project.

As part of his interview, Albert Gibson, a Korean War veteran was asked about the time he served. He said, “A lot of people thought that the Korean War never gained anything. We saved South Korea from being part of North Korea – and look at what North Korea is like today.”

The Veterans History Project of the Library of Congress’ American Folklife Center is an oral history program that preserves the personal accounts of America's wartime veterans. It is designed to help future generations better understand the realities of war from those who served their country during armed conflicts. The interviews will also be invaluable to future scholars and researchers who are interested in better understanding the World War II experience from the service person’s perspective.

The United States Congress created the Veterans History Project in 2000. The authorizing legislation (Public Law 106-380), sponsored by Representatives Ron Kind, Amo Houghton, and Steny Hoyer in the U.S. House of Representatives and Senators Max Cleland and Chuck Hagel in the U.S. Senate, received unanimous support and was signed into law by President William Jefferson Clinton on October 27, 2000.

The Cole Land Transportation Museum preserves and displays a selection of Maine’s land transportation equipment in hopes to inspire today’s generation through their predecessors’ triumphs. In addition, the museum works closely with veterans to bring their knowledge and experiences to the area children and community members. The museum is open May 1 through November 11, seven days a week, 9 a.m. – 5 p.m. Children under 19 are admitted free. More information can be found by visiting ColeMuseum.org or calling (207) 990-3600 ext. 13.

For more than 100 years, Husson University has prepared future leaders to handle the challenges of tomorrow through innovative undergraduate and graduate degrees. With a commitment to delivering affordable classroom, online and experiential learning opportunities, Husson University has come to represent superior value in higher education. Our Bangor campus and off-campus satellite education centers in South Portland, Wells, and Presque Isle provide advanced knowledge in business; health and education; pharmacy studies, science and humanities; as well as communication. In addition, Husson University has a robust adult learning program. For more information about educational opportunities that can lead to personal and professional success, visit Husson.edu.

The veterans were interviewed at Husson University’s New England School of Communications. Over the past 2 years, the NESCom journalism program has submitted 8 interviews to the Library of Congress.This is a 240 dpi .jpg and is suitable for use in print and online.

Women's Army Corp Staff Sergeant and Medic Delores Hainer of Brewer, Maine shared her Korean War-era experiences as part of this oral history project.This is a 240 dpi .jpg and is suitable for use in print and online.

US Army soldier John Wedin shared his Korean War-era experiences with student interviewers as part of the Library of Congress’ Veterans History Project at Husson University.This is a 240 dpi .jpg and is suitable for use in print and online.

Jeff Hope is a journalism instructor at Husson University's New England School of Communications.This is a 200 dpi .jpg and is suitable for use in print or online.

Husson University's New England School of Communications is located on a beautiful 208-acre campus in scenic Bangor, MaineThis is a 300 dpi .jpg and is suitable for use online and in print.