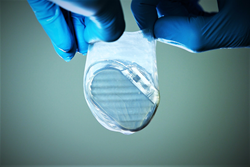 The publication describes a twelve-month study performed in the minipig, investigating the performance of a novel permanent-implantable anti-fibrotic membrane (Hylomate®), when applied around implantable cardiac electronic devices (CIEDs). Sixteen animals were each implanted with one pacemaker covered by the Hylomate® membrane and one native pacemaker at equivalent anatomical sites.

Simone Bottan, HYLOMORPH CEO, stated, “This study has shown the clinical potential of a safe, minimally fibrotic, and stabilizing interface between the implant and the surgical pocket. Our hope is that this will help to create the conditions for simplified CIED revision surgeries and reduce complications in patients.”