After the success of the iHeartRadio Music Festival in Las Vegas, country fans will see the first-ever iHeartRadio Country Festival this spring. Tickets go on sale today at SuperStarTickets.com. 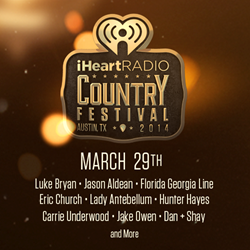 For the past few years, Clear Channel, the leading media company in America, has been making waves with its iHeartRadio Music Festival in Las Vegas. This popular festival has grown so large that it holds the title for the largest live concert event in radio history. This spring, Austin, Texas will get its own taste of this success on March 29th by selling tickets to the iHeartRadio Country Festival.

Performers such as Luke Bryan, Carrie Underwood, Eric Church, Jason Aldean, Florida Georgia Line, Lady Antebellum, Jake Owen, and Hunter Hayes are among the names of headliners that will come together at Austin's Frank Erwin Center for this massive country music event.

"The response to our country performers at the last three iHeartRadio Music Festivals was so incredible we decided to create an entire show just for them,” John Sykes, President of Clear Channel Entertainment Enterprises, said in a statement. “It will be a country fan's dream and a testament to the power of country music and recognition of the stature of these artists."

2014 iHeartRadio Country Festival Tickets go on sale today and can be found at SuperStarTickets.com.

To read more about the iHeartRadio Country Festival and to see the lineup, click here.