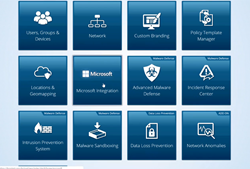 At iboss, we are committed to partnering with Microsoft to ensure fast and efficient cloud application access is available to users, regardless of where they work.” Peter Martini, President of iboss

iboss today announced native integration of iboss cloud with Microsoft Virtual WAN which allows branch offices and remote locations to securely access cloud applications without the need to backhaul traffic to centralized datacenters. With the exponential rise of cloud application use, traditional Internet security models that require data from branch offices to be sent to centralized Internet security appliances is substantially increasing costs and reducing user productivity due to the volume of backhauled Internet traffic. Allowing this traffic to traverse between users and the cloud directly increases Internet speeds, increases productivity, and reduces costs by eliminating unnecessary Internet data backhaul through private network connections. Microsoft Virtual WAN, or vWAN, extends the Microsoft cloud to branch offices, allowing them to communicate with each other when necessary through Microsoft Azure, while sending cloud-bound data directly to the Internet. With the combination of iboss cloud and Microsoft Virtual WAN, any traffic sent from branch offices to the Internet is automatically routed through iboss cloud by Microsoft Virtual WAN ensuring secure and compliant Internet access.

Microsoft’s global network covers 70,000 miles of fiber in 130+ locations reaching 63% of the global GDP within 25ms.

"The combination of iboss cloud and Microsoft Virtual WAN is a game-changer for organizations with remote locations that are forced to access the Internet through security appliances that were not designed for the distributed world,” said Peter Martini, President of iboss. “At iboss, we are committed to partnering with Microsoft to ensure fast and efficient cloud application access is available to users, regardless of where they work.”

About iboss
iboss is a cloud security company that provides organizations and their employees secure access to the Internet on any device, from any location, in the cloud. This eliminates the need for traditional security appliances, which are ineffective at protecting a cloud-first and mobile world. Leveraging a purpose-built cloud architecture backed by over 100 patents and over 100 points of presence globally, iboss protects more than 4,000 organizations worldwide. To learn more, visit http://www.iboss.com.