Unleashing a new alternative rock sound, the collaborative project titled Sridhar & Arun Shenoy announce the release of "Illusion", the duo's follow up to their first single, "Make Up Your Mind Or Leave It Behind." 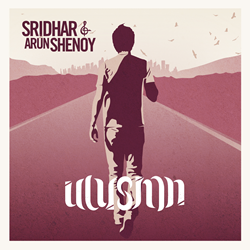 'Illusion' sees the duo moving towards an alternative sound with a retro vibe...

Narked Records is delighted to announce the release of the hotly-anticipated second single, "Illusion," from the Sridhar & Arun Shenoy project. Sridhar assumes lead and backup vocal responsibilities on this single, which sees the duo moving towards an alternative sound with a retro vibe, compared to the hard rock aesthetic of the first single, "Make up Your Mind Or Leave It Behind" released in May 2014.

The artwork for the song features a quirky ambigram for the title – a typographical design that sees the song title reading the same – from an inverted viewpoint. The ambigram has been conceived by art director Roshni Mohapatra and masterfully executed by Rich Lock at Devolution Designs in the UK.

The song was made available for pre-order on iTunes leading up to the official release date on August 05, 2014. One can also stream the full song online at narked.com. Radio promotion is being handled by Jerome Promotions.

SRIDHAR is a Berlin-based songwriter, guitarist, and record producer. He exploded on the scene in the summer of 2009 with Transcend, his rock instrumental debut. This critically-acclaimed album that yielded the hit song “India” bought to focus Sridhar's mastery of guitar technique and song writing, and was followed up by the EP Afterward in 2010 which yielded another hit song in “Folked.” In late 2011, Sridhar released Miles, an album that serves as a tribute to the multitude of influences in Sridharʼs musical journey, inspired by sounds from classical music to synthesized soundscapes. (sridharsmusic.com)

ARUN SHENOY is a Singapore-based songwriter and record producer whose production style spans genres as wide as rock and funk, to jazz and world music. Arun writes and produces music released as solo productions under his own name, as well as for other bands and solo artists. His last album, Rumbadoodle, was nominated in 2012 for a GRAMMY® at the 55th annual GRAMMY® Awards. The follow up single, “Bliss,” from his Indian World Fusion project was launched by the Recording Academy via a Worldwide "Exclusive First Look" at GRAMMY.com in 2013, and went on to receive extensive airplay on stations nationwide charting on 15 CMJ New World charts. (arunshenoy.com)

NARKED RECORDS is a boutique record label focused on high quality music services and releases worldwide. Our business discovers and develops recording artists. Through our extensive experience in the business, we market and promote music, with distribution across US mainstream record retail, alternative channels, as well as digital. Additionally, we offer musical experiences by our artists in live format, and across a broad spectrum of radio formats. (narked.com)