InfoTracer has done the heavy lifting when it comes to researching the most common reasons people in the U.S. are arrested, by state. The enclosed map presents this information in a visual format and allows you to see regional patterns that emerge. This visual provides a fascinating snapshot of the current social and legal issues the country is facing. 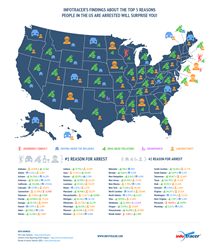 Top Reasons for Arrests in the U.S.

At Infotracer we believe that facts speak louder than words. We ran this study to search for commonalities and anomalies in the data that can help us understand the big picture of arrests in the U.S. Our findings illustrated how culture differs from state to state and impacts the reasons for arrests

The most common offenses leading to arrests in the United States are Larceny/Theft, Drug Abuse Violations, Driving Under the Influence, Drunkenness, and Disorderly Conduct. Interestingly, Disorderly Conduct only showed up as the most common and second most common reason for arrest records in three states. For someone following the daily media headlines, this may be surprising, as the items that most often make the news involve violence and the use of firearms. This research is a reminder that the most frequently occurring crimes are those of a petty and non-violent nature.

As laws change, so do arrest statistics. Marijuana legalizations across multiple states will likely shift these statistics a lot in the coming years, and it will be interesting to see what this type of legislation does to the big picture of U.S. arrests. Driving Under the Influence regulations have been changing as well, but in the other direction. Many states have lowered the legal blood alcohol level for operating a vehicle recently. This increases the potential for arrests involving driving under the influence.

Other intriguing insights uncovered by InfoTracer include: