Power2Run is the first and only running app delivering real-time Power on your wrist without a foot-pod. Available now in the App Store for Apple Watch Series 3 and 4. 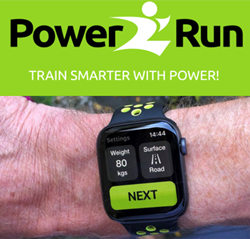 Image courtesy of Hans Van Dijk and Ron Van Megen, authors of The Secret of Running.

running with Power is ... the fastest way to race.

Power2Run was created for triathletes and runners interested in maximizing athletic performance.

For decades, cyclists have enjoyed the benefits of training and racing with Power meters. Until recently the technology did not exist for delivering Power to runners. This has changed with the introduction of Power2Run for the Apple Watch Series 3 and 4.

Power2Run leverages the Apple Watch’s impressive hardware capabilities including GPS location tracking, internal motion sensing accelerometers and gyroscopes, and a cm accurate barometric altimeter. These sensors combined with the raw computing power of Apple’s S3/S4 watches and some innovative software from Inspyridon make it possible to deliver running Power in real-time to a runner’s wrist!

Early adopters of Power are realizing the benefits of steady effort running on varied terrain. Runners can see dramatic improvements by pacing their running effort evenly. The benefits extend to all types of running from local park runs to marathon qualifiers and everything in between.

“Many runners expend way too much energy running up hills and not enough on the downhills”, says founder and Chief Scientific Officer of Inspyridon Technologies, Doug Woods. “For most it is immediately obvious that running with Power is the easiest way to train and the fastest way to race.”

The Power2Run phone app is available as a free download in the Apple App Store. The premium app for Apple Watch Series 3 and 4 is an in-app purchase for $9.99.

Inspyridon Technologies is a Burlingame, CA based startup, founded in 2016 with the goal of bringing the benefits of Power to all runners.