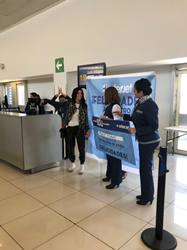 To celebrate the milestone, Romano was awarded 100 round trip flights wherever Interjet flies.

Interjet Airlines, a leading international airline based in Mexico, welcomed its 100 millionth passenger on board today. Margot Romano, from Mexico City, was anointed as Interjet Airlines 100 millionth passenger when she boarded her Mexico City to New York flight. To celebrate the milestone, Romano was awarded 100 round trip flights wherever Interjet flies. The flights can be shared with family and friends with travel completed within one year.

“We are proud to have made air travel affordable for the millions of passengers who have flown with us,” said Julio Gamero, Interjet’s Chief Commercial Officer. “From our humble beginnings just 14 short years ago, flying just three aircraft serving four destinations in Mexico, Interjet has become one the fastest growing and most admired airlines in North America flying to over 52 destinations in the U.S., Canada, Mexico, Central, and South America. We will continue to offer our unique brand of lower fares with free checked bags on select fares, more legroom between seats and our great service that has been embraced everywhere we fly,” he added.

Interjet was recently honored with Skytrax’s World Airline Award as the ‘Best Low-Cost Airline in Mexico and Best Cabin Crew in Mexico. In 2017, Interjet was awarded the Travelers' Choice Trip Advisor Award as the best Mexico airline.