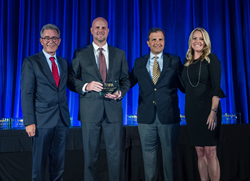 Franchise businesses are an engine of economic growth across America, in a large part due to the hard work of tens of thousands of franchise business owners like Jeff and Scott.

The International Franchise Association (IFA) the oldest and largest organization representing franchising worldwide, has named Jeff Barclay, a Goodcents franchise owner in Lincoln, Neb. one of its 2018 Franchisees of the Year.

“IFA is proud to recognize Jeff Barclay and his partner Scott Ritter for their extraordinary story and success,” said Robert Cresanti, IFA President and CEO. “Franchise businesses are an engine of economic growth across America, in a large part due to the hard work of tens of thousands of franchise business owners like Jeff and Scott. As Washington looks to continue our economic growth, policymakers would do well to remember that franchising is making a difference across our country.”

Barclay was recognized at the IFA’s Franchise Action Network Annual Meeting in Washington, D.C. on Sept. 5. The event brings together more than 400 franchise business leaders to raise awareness with policymakers on the industry’s continued successes and economic contributions.

“It is an honor to have one of our franchise owners recognized at a national level by the IFA,” said Mike O’Toole, Goodcents Chief Growth & Support Officer. “Jeff and Scott have an incredible story and we are so proud to see them earn this level of recognition for all their hard work and dedication.”

Last year, Goodcents Deli Fresh Subs was voted the #1 sandwich shop as part of the ‘Best of Lincoln’ Awards and Barclay was awarded the 2017 Enterprising Gambler Award from the Lincoln Independent Business Association (LIBA). Barclay and Ritter also won the Nebraska Restaurateur of the Year Award in 2016.

About Goodcents
Goodcents Deli Fresh Subs is one of the leading fast casual brands in the country with more than 29 years experience providing high-quality deli fresh subs, house-baked breads and pasta. Headquartered in DeSoto, Kan. with more than 80 locations across the country, the company is known for is signature bread recipes baked fresh in the restaurants every day, slicing sandwich meats and cheeses to order, and hearty pasta meals. Goodcents was named a Top Franchise by Franchise Business Review and Entrepreneur Magazine in 2018, as well as one of the Top 50 Best Franchises by FitSmallBusiness.com in 2016. Visit goodcentssubs.com for more information. To connect with Goodcents through Facebook visit http://www.facebook.com/EatGoodcents or Twitter @EatGoodcents and Snapchat at GoodcentsSubs.