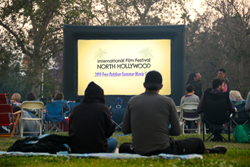 "Thanks to the International Film Festival North Hollywood for creating what I hope will become a new community tradition.” -- Paul Krekorian

“I’m thrilled that so many people are coming out to watch these great movies together,” said Krekorian, who represents North Hollywood and the surrounding area. “Sharing the evening in a public place with neighbors, family and friends really enriches our neighborhood. Thanks to the International Film Festival North Hollywood for creating what I hope will become a new community tradition.”

The series began with The Beatles “A Hard Day's Night,” followed by “The Princess Bride” and next up, a screening of “Rocky,” the 1976 Academy Award©-winner for Best Picture. It's an American rags-to-riches story of a down-on-his-luck boxer who gets a million-to-one chance at redemption and love.

Rocky screens at 8:15 PM on Friday, July 3 in North Hollywood Park. People can enter a raffle for a free pair of Los Angeles Angels baseball tickets. American flags will be handed out in honor of the Independence Day holiday, and chairs will be provided if you can't bring your own. Free popcorn, too, courtesy of Film L.A.

Food options include $5.00 off on a Pizza Picnic to go (pizza, drink, and jumbo cookie) at Pitfire Artisan Pizza NoHo the night of the show. Also, The Fat Dog Restaurant NoHo on Magnolia Blvd. is offering a special dine-in menu on July 3 with a specialty cocktail for grown-ups and a kids menu. G's Taco Spot and S'Cream ice cream truck will be in the park.