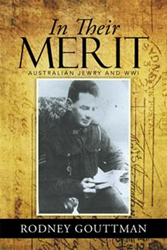 According to author Rodney Gouttman, very little has been researched regarding the role of Australian Jewry in their country’s part in this conflagration. This keen observation prompted him to write “In Their Merit’-Australian Jewry and WWI” (published by Xlibris AU).

Gouttman believes that the Jewish story of World War I is far more complex than the current communal narrative. He noticed that the sketchy account of the Australian Jewish involvement in World War I is due to a lack of evidence from that era, and little enthusiasm for collecting whatever was available subsequently. This book open up discussion about Australian Jews’ contribution to their country’s World War I effort, based upon the limited body of evidence available.

“No other book has thoroughly examined the subject of Australian Jewry in World War I,” says Gouttmann. “It is relevant in today’s society because this year marks the centenary of the seminal Gallipoli campaign of World War I in which the Allies fought against the German ally, Turkey. This event is the subject of much remembrance and ceremony in many countries, including Australia.”

Informative and thought-provoking, Gouttman says that “In Their Merit’-Australian Jewry and WWI” seeks to provide reasons for the current state of communal ignorance among today’s Australian Jews, and to question traditional wisdom which assumes that the communal spokesmen’s mindset of the day regarding the war accurately reflected that of the average Australian Jew. Furthermore, it provides readers an in-depth look and a better understanding of the role played by Australian Jewry in World War I.

About the Author
Dr. Rodney Gouttman former senior academic at the University of South Australia was an adjunct research scholar in the School of Historical Studies at Monash University. His academic interests cover Australian Jewish history, contemporary anti-Semitism, Philosemitism, the history and politics of the Australia-Israel relationship, the Arab-Israel conflict, and the Jewish political tradition. He has written two books and many academic articles. His work has also appeared in various publications. Gouttman has been a visiting professor/research scholar at the University of Massachusetts, and the Hebrew, Ben Gurion, and Haifa universities in Israel.

Xlibris Publishing Australia, an Author Solutions, LLC imprint, is a self-publishing services provider dedicated to serving Australian authors. By focusing on the needs of creative writers and artists and adopting the latest print-on-demand publishing technology and strategies, we provide expert publishing services with direct and personal access to quality publication in hardcover, trade paperback, custom leather-bound and full-color formats. To date, Xlibris has helped to publish more than 60,000 titles.For more information, visit xlibrispublishing.com.au or call 1800 455 039 to receive a free publishing guide. Follow us @XlibrisAus on Twitter for the latest news.
###