InventHelp, founded in 1984 in Pittsburgh, submits their inventors' ideas to companies for their consideration and potential feedback. 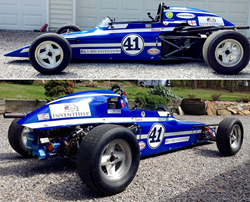 “We enjoy supporting our employees inside the office and in the community.” - Nicole Lininger, InventHelp Director of Corporate Communications

A new sponsor is about to be introduced into the exciting world of Formula motor racing – the most popular motorsport in the world.

Depicted as chipping away at the first stone wheel, InventHelp’s well-known logo will join the hallowed company of Formula racing sponsors including Red Bull, Mobil, Castrol and more. The InventHelp decals also include the company’s 1-800-INVENTION phone number.

The Montreal, Canada venue will host the second round of the Formula 1600 series races this season and one of the cars will be driven by InventHelp employee Nigel Cass of Cass Racing, based in Pittsburgh, PA and founded in 2009.

“We are excited that the InventHelp caveman will soon be seen on the raceway,” said Nicole Lininger, InventHelp Director of Corporate Communications. “We enjoy supporting our employees inside the office and in the community.”

Cass and his 1600cc Cavey are slated to appear in eight races this season, including the U.S. Vintage Grand Prix at the Pittsburgh International Race Complex in Wampum, PA. The Montreal, Canada venue will host the second round of the Formula 1600 series races this season.

F1600, often called FF, has a rich history both in the U.S. and around the world. The first F1600’s were introduced to the USA in 1969 and have continuously been raced ever since. It is a non-winged purpose built single seat race car which is well known as a highly competitive class for all participants. Many of the top drivers in the world started in FF, including U.S. racer, Michael Andretti.

In addition, InventHelp produces INPEX®, the largest inventor trade show in the U.S., in Pittsburgh every year and will celebrate 30 years June 16-18, 2015.