ScrewMat.com has announced the release of a patent pending magnetic guide and tool for the mobile device repair industry. The ScrewMat for iPad Mini WIFI, is designed to allow for easy assembly and disassembly for cracked LCD and digitizer screen repair and other common iPad repairs for the popular Apple tablet. 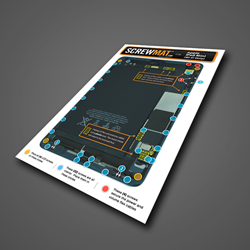 The ScrewMat for iPad MINI WIFI saves time and money for out of warranty repairs, and that makes the ScrewMat that much more valuable.

ScrewMat.com has released the latest version of ScrewMats, including the ScrewMat for iPad Mini WIFI. The ScrewMat is a tool and magnetic guide that helps professional repair technicians and amateur do-it-yourself repair consumers more accurately disassemble and reassemble their own iPad Mini mobile tablet device.

"The LCD screen repair for the iPad Mini can be extremely difficult. The ScrewMat helps the repair technician and DIY repair enthusiast accurately keep track of a variety of small screws and pieces within the iPad Mini WIFI,” said Tony Baker, Vice President of Marketing for ScrewMat.com. “The ScrewMat for iPad MINI WIFI saves time and money for out of warranty repairs, and that makes the ScrewMat that much more valuable.” Said Baker.

The ScrewMat for iPad Mini WIFI is just the latest in an expanding series of magnetic repair guides by ARI INC. ScrewMats are also available for a variety of other models, including:

The ScrewMat is currently available through a growing network of authorized dealers and wholesale part suppliers within the United States and around the world.

Leading authorized distributors in the United States include:

Wireless part and tool supply sellers are encouraged to apply to become an official ScrewMat distributor by completing an application at: http://SCREWMAT.com