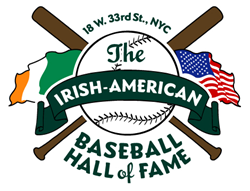 The names on this year's ballot include an interesting range of players, managers, broadcasters and executives. There is no clear favorite at this time, which will make the voting process fun.

The Irish American Baseball Hall of Fame (IAB HOF) today announced the names of the nominees on the 2015 induction ballot. They include:

“The names on this year's ballot include an interesting range of players, managers, broadcasters and executives. There is no clear favorite at this time, which will make the voting process fun,” said Shaun Clancy, owner of Foley’s, which features one of the country’s most extensive public displays of baseball memorabilia.

Results of the voting will be announced next month. The induction ceremonies will take place this summer at Foley’s NY Pub & Restaurant (18 W. 33rd St.), which houses the Irish American Baseball Hall of Fame. Voters include past inductees into the IAB HOF and a distinguished panel of baseball historians.

Additionally, The Irish American Baseball Hall of Fame will present its second annual Pete Caldera-Duke Castiglione “I Didn’t Know He Was Irish” Award, which goes annually to an honoree whose Irish roots are not widely known.

With the blessing of the National Baseball Hall of Fame, Foley’s, a popular destination among baseball players, executives, umpires and fans, created the Irish American Baseball Hall of Fame to recognize players, managers, executives, journalists, and entertainers of Irish descent. Inductees are chosen based on a combination of factors, including impact on the game, popularity on and off the field, contributions to society, connections to the Irish community, and, of course, ancestry.

The game of baseball has welcomed immigrants from its earliest days, when an estimated 30 percent of players claimed Irish heritage. Many of the game’s biggest stars at the turn of the 20th century were Irish immigrants or their descendants, including Michael “King” Kelly, Roger Connor (the home run king before Babe Ruth), Eddie Collins, Big Ed Walsh and managers Connie Mack and John McGraw. Today, major league teams regularly sign players born in Latin America, Japan, Canada, and elsewhere.

Shaun Clancy, an amateur baseball historian, created the Hall after learning about the rich heritage of Irish Americans during the sport's infancy – a legacy overshadowed in recent years by other ethnicities. He decided to celebrate his roots and those who helped make the game great by creating a shrine to Irish Americans in baseball in 2008.

Foley’s NY Pub & Restaurant (18 W. 33rd St.) is home of the Irish American Baseball Hall of Fame. A popular destination among baseball players, executives, umpires, media, and fans, Foley's is located across from the Empire State Building. The "Irish Bar with a Baseball Attitude" features walls adorned with 3,000 autographed balls, bobbleheads, game-worn jerseys, stadium seats and other artifacts that make it the premier baseball bar in New York and one of the best sports bars in America. For more information, call (212) 290-0080 or visit http://www.foleysny.com or http://www.facebook.com/FoleysNYPub.