A new study by PsychTests.com indicates that people who are uncomfortable acknowledging their blunders tend to be perfectionists with deep-seated self-esteem issues, and a need to be liked. 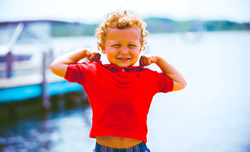 For some people, admitting mistakes is like exposing a weakness, and this makes them feel vulnerable.

Mistakes are embarrassing reminders that we’re not perfect, but they are also valuable learning opportunities.

The dozen or so publishing companies who turned down J.K. Rowling’s Harry Potter series have probably kicked themselves quite a few times by now for not jumping on the opportunity. Same goes for NASA after taping over the original recording of the moon landing, as well as any former would-be conquerors who thought invading Russia during winter was a smart war tactic. Would anyone willingly take responsibility for these catastrophic boo-boos? Probably not. According to research from PsychTests, admitting mistakes isn’t easy for a lot of people, and not just because they’re afraid of the potential consequences.

Analyzing data from 4,727 people who took the Self-Esteem Test, PsychTests’ researchers compared two groups: Those who will acknowledge when they’ve messed up and those who will not. Here’s how they compared:

PEOPLE WHO ARE UNCOMFORTABLE ADMITTING MISTAKES TEND TO BE PERFECTIONISTS

“When a person makes a mistake, they may try to cover it up or place blame elsewhere - and while that seems quite underhanded and unfair, it is often motivated by fear and insecurity,” explains Dr. Jerabek, president of PsychTests. “It could be a fear of the consequences, of getting into trouble, or of losing face. Mistakes are embarrassing reminders that we’re not perfect, but they are also valuable learning opportunities. If you’re willing to acknowledge your mistake, learn why it happened and how to fix it, you’re less likely to commit the same error again. Moreover, admitting when you’re wrong takes guts, and that’s something to be admired. That is why people in our study who are comfortable showing this type of vulnerability also have high self-esteem. Our mistakes do not make us weak, they make us wiser and more resilient. Every mistake and every failure is a lesson to be learned. The best approach is to milk it for information, and then let it go.”

How strong is your self-esteem? Check out our Self-Esteem Test at https://testyourself.psychtests.com/testid/3102

Have trouble admitting mistakes? Your self-esteem may be playing a role.People who are uncomfortable acknowledging their errors and faults struggle with a number of insecurities.