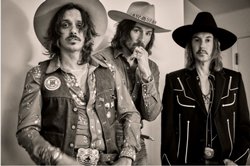 GRAMMY-nominated country trio Midland will perform a free concert for the “Million Dollar Music Fest” on the town square during Jackson Hole’s Old West Days on Sunday, May 26, 2019.

Midland is an enormous talent with a long history in Jackson Hole, and we are very fortunate to be able to share their music with Jackson locals and visitors.

Old West Days just got bigger and better with the announcement of the new “Million Dollar Music Fest” presented by The Cowboy Bar and co-sponsored with the Jackson Hole Chamber of Commerce. Midland, the reigning Academy of Country Music “New Vocal Group of the Year,” will perform a free big-stage concert on Jackson Hole’s famous town square on Sunday, May 26, 2019. The outdoor Midland concert will anchor the 10-day Old West Days Festival, a long-standing celebration of Western pride.

“We are absolutely thrilled to add the Midland concert to the incredible Old West Days lineup,” says Maureen Murphy, director of events at the Jackson Hole Chamber of Commerce. “Midland is an enormous talent with a long history in Jackson Hole, and we are very fortunate to be able to share their music with Jackson locals and visitors.”

Old West Days, which includes Elkfest, brings a variety of spectacular spring events to Jackson Hole loaded with family fun and Western tradition. Jackson was recently named a best place to visit in May by Travel + Leisure in part due to Old West Days.

Elkfest, Saturday, May 18, offers family fun starting with the annual Jackson Hole Boy Scouts Elk Antler Auction, drawing a crowd to the spectacle of thousands of pounds of antlers collected by the Boy Scouts from the National Elk Refuge. The famous Town Square is alive all day with terrific kid-friendly activities, including ropes courses and interactive wilderness demos.

High Noon Chili Cook-off, Sunday, May 19, sees the talented chefs (professional and amateur) of Jackson duel it out in a chili cook-off, judged by a local celebrity panel and a huge crowd who get to choose the “People’s Choice” award. Bring your appetite, the chili selection is the best in the West.

Bar J Chuckwagon Season Opening Dinner, May 24. Some folks call it a Western music show; some call it a stand-up comedy show with masterful cowboy music; others call it the best musical experience in the West. Call it what you want – the fact remains – The Bar J Wranglers from Jackson Hole, Wyoming, deliver some of the purest harmony, best musicianship and funniest ranch humor ever seen on stage. As soon as the Bar J Wranglers take to the stage, listeners leave behind their busy life and settle into a time long ago – a time of the singing cowboy.

Old West Days Parade, Old Time Entertainment and Brew Fest, May 25, offers all-day action centered around the town square and one of the last and best horse-drawn parades of the Old West. Enjoy mountain men, vintage vehicles, covered wagons and the legendary gathering of gunslingers of the West. Family entertainment follows on the town square with popular live Western music acts. The Brew Fest features an amazing selection of 25 regional brews and the chance to sip them all.

The Million Dollar Music Fest’s free Midland concert will be held on the Jackson Hole Town Square. A limited number of VIP tickets will be available for online purchase beginning April 1, 2019, at cowboybarjh.com; VIP tickets include prime side-line viewing with a dedicated bar. For the general public, beer, wine and food will be available for purchase inside the grounds. Gates will open at 4 p.m. Other acts will be announced soon.

Midland’s talented trio of musicians started the band in Jackson Hole in 2013 and was later signed to Big Machine Records. The country super-group, one of the most exciting headline acts in country music, was nominated for two GRAMMYs in 2018 and has received acclaim from Rolling Stone and Billboard, as well as from Vogue for their unique Western fashion.

Conveniently located just 20 minutes from the Jackson Hole Airport, Jackson, Wyo., is served by major airlines including Delta, United, American and SkyWest. Reservation information for Jackson’s numerous hotels and schedules for events and activities year-round may be found at http://www.jacksonholechamber.com. For a full calendar of Elkfest and Old West Days events visit http://www.jacksonholechamber.com/events/ or contact Maureen Murphy at Jackson Hole Chamber, 307.733.3316.

The “Million Dollar Music Fest,” presented by the Cowboy Bar and co-sponsored with the Jackson Hole Chamber of Commerce, will feature a lineup of musical entertainment during Old West Days in May.