“From Blunder To Blessing” from Christian Faith Publishing author Jan D Thomas is a riveting narrative of an experienced life that reveals God’s benevolence and mercy. 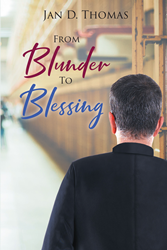 “From Blunder To Blessing”: an enlightening autobiography that contains moments of spirituality and personal endeavors that bring glory and honor to God. “From Blunder To Blessing” is the creation of published author, Jan D Thomas, a state representative for CRI in his home state, a prison warden, a pastor, and an Air Force graduate who helped begin a volunteer program that included Celebrate Recovery.

Thomas shares, “Born at the edge of an open-pit copper mine in New Mexico, Jan Thomas comes from a background of working-class people and cultural Christians, but not committed believers. Growing up, he had influences and experiences causing doubts about himself and his ability to become more than his environment would have predicted.

“Influenced by teachers, Air Force buddies, and others, he began to trust God to do for him what he could not do for himself. As a youngster, he thought he had no academic ability, but got BA and MDiv degrees. As a pastor, he felt like a failure and began a career working in prisons. Struggling with life, he continued to try to serve.

“He married Fern, a widow with two children, and they had another child together. He became an administrator after only a few years, but his codependent nature and the desire to fit in and to be liked at any cost nearly cost him his life. An old alcohol issue came back at a time he was involved in two of the most amazing ministries of the twenty-first century, Celebrate Recovery and Kairos. Retiring in 1997, he began using CR in the prison he retired from. He was asked to help get the program into jails and prisons and became the first national director of Celebrate Recovery Inside.

“Celebrate Recovery Inside stretches across the United States and Canada, as well as in many other nations. His own struggles have helped him become dedicated to the purpose God intended for him from the beginning. His ministry was not as a pastor but to those, like him, who struggled with life’s issues. When he stopped teaching and started the healing process for himself, God helped him to stop blundering and begin to see more of God’s blessing.”

Published by Christian Faith Publishing, Jan D Thomas’s new book presents a resounding success in life that only the Lord can give to those who seek his will in their lives.

This book also provides inspiration on how one can make a huge difference in changing people’s lives toward betterment and blessedness by employing God’s grace and extending his promise of salvation to others.

View a synopsis of “From Blunder To Blessing” on YouTube.

Consumers can purchase “From Blunder To Blessing” at traditional brick & mortar bookstores, or online at Amazon.com, Apple iTunes store, or Barnes and Noble.

For additional information or inquiries about “From Blunder To Blessing,” contact the Christian Faith Publishing media department at 866-554-0919.