“For a Time Such as This” from Christian Faith Publishing author Joan Calla is an illuminating narrative that tells of a journey that reflects the reality of life and faith. 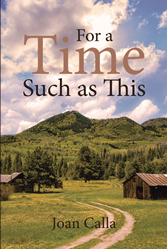 Calla shares, “Nestled in a valley in the mountains of Colorado, a small group of people trying to escape the clutches of the government have set up an off-the-grid community, while the rest of the country evolves into a new higher-tech, more advanced society. This is the story of a young woman’s adventures as she is forced to leave the only life she has known in a government-controlled, technology-based city and live in a settlement where time has been rolled back more than a hundred years.

“As our country continues to spin out of control with drugs and violence, social media determines what is acceptable and what is not, and our government controls more and more of our personal freedoms, this futuristic Christian novel explores a possible scenario set in the year 2039.”

This book also paints a reality of how the world works and shows the impact of human sentiment and belief in human life.

View a synopsis of “For a Time Such as This” on YouTube.

Consumers can purchase “For a Time Such as This” at traditional brick & mortar bookstores, or online at Amazon.com, Apple iTunes store, or Barnes and Noble.

For additional information or inquiries about “For a Time Such as This,” contact the Christian Faith Publishing media department at 866-554-0919.