“There's An Angel Inside of Me” from Christian Faith Publishing author John Paul Carinci is a compelling story of a man who died in a car accident but is given a second chance by God to continue his life to make things right and help others, while guided by an angel inside him. 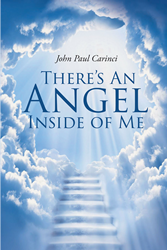 “There's An Angel Inside of Me”: a stirring journey of a man who earns his way to enter heaven. “There's An Angel Inside of Me” is the creation of published author John Paul Carinci, a worldwide published author, successful insurance executive, and president of Carinci Insurance Agency, Inc., for over forty years. He is also an author, songwriter, poet, and CEO of Better Off Dead Productions Inc., a movie production company. John is a motivational speaker and has appeared in over one hundred radio and TV interviews throughout the world.

Carinci writes, “After fifty-eight-year-old Ryan Simmons dies in a car accident, he is told in the hereafter that he will not make it into heaven, but rather be in limbo for eternity. He begs to be given a second chance to return to Earth.

“Although a millionaire and ruthless business owner on Earth, Ryan is powerless in the hereafter but vows to change if allowed life again. Ryan is given a rare second chance by God to continue his life and right his wrongs and help others, but only with an angel, Theodore, inside his head, watching over him until God recalls him.

“God assigns Ryan a unique task to choose and interview six people from the hereafter who can inspire him and help others. Ryan’s choices are very intriguing as he uncovers deep secrets from the most philosophical and ruthless individuals, figuring out the meaning of life and what motivates good and evil alike. Will Ryan live, be killed by someone out to get him, or earn his way into heaven?

Published by Christian Faith Publishing, John Paul Carinci’s new book is a plot-driven tale that will thrill the readers about a man’s choices as he uncovers deep secrets from the most philosophical and heartless individuals, finding out the meaning of life and what prompts good and bad.

With this purpose, Carinci aims to make the readers realize to make use of the time in doing good deeds because not everyone is given a second chance to make things right after being barred from entering heaven.

View a synopsis of “There's An Angel Inside of Me” on YouTube.

Consumers can purchase “There's An Angel Inside of Me” at traditional brick & mortar bookstores, or online at Amazon.com, Apple iTunes store, or Barnes and Noble.

For additional information or inquiries about “There's An Angel Inside of Me,” contact the Christian Faith Publishing media department at 866-554-0919.