John’s Crazy Socks is going back to Washington D.C. advocating for people with differing abilities. Co-founders John Cronin and his father, Mark X. Cronin, will speak at the hearing of the Helsinki Commission, on Monday, September 24, 2018. 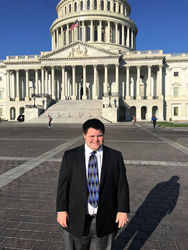 John’s Crazy Socks is going back to Washington D.C. advocating for people with differing abilities. Co-founders John Cronin and his father, Mark X. Cronin, will speak at the hearing of the Helsinki Commission, on Monday, September 24, 2018.

John and Mark will speak for the rights of people with differing abilities to work and to share the news of what John's Crazy Socks has accomplished. They will speak at a hearing titled “A Truly Inclusive Society: Encouraging the Ability in Disability," held in a Senate Hearing Room by the Helsinki Commission. You can watch the hearing live here.

John and Mark have been invited to speak because John’s Crazy Socks has demonstrated that hiring people with a differing ability is a good business decision. The company has created 35 jobs and 18 of them are held by people with differing abilities.

Mark says, “We have no government support and no special programs. Yes, we make accommodations for our differing abled, but we also make accommodations for our neuro-typical employees. We have created a unified workplace where people of differing abilities work side-by-side with neuro-typical employees. And everyone benefits. We have better productivity, better morale and better retention.”

While on Capitol Hill, John and Mark will meet with legislators and staff to promote changes in laws and policy to protect the rights of workers with differing abilities. Mark said, “We need to see the differently abled as full-fledged citizens, people able to contribute, not helpless beings who need pity. We need laws that guarantee the same rights – including the same wages – as the neuro-typical population. The Fair Labor Standards Act of 1938 allows employers to pay the people with disabilities less than a minimum wage. We are working with the National Down Syndrome Society to support passage of the TIME Act to afford all people a fair, minimum wage.”

John and Mark consistently advocate to change laws regarding benefits for working people. Mark says, “We have benefits programs that limit the ability of the disabled to work. Our colleagues with disabilities work part-time. Why? Because if they work too many hours, they will lose their Medicaid and they cannot afford to do so.”

Mark X. Cronin said, “Employers complain that they cannot find enough good workers, yet nearly 80 percent of the disabled are unemployed. We have this vast untapped pool of labor – a great national resource – that is ready, able and willing to work. We want people to see the benefits of hiring workers of all abilities. We hire people of differing abilities not out of altruism, but because it is good business.”

A young man with Down syndrome, John Cronin, and his Dad, Mark X. Cronin, founded John’s Crazy Socks with a simple mission: spreading happiness. They’re a social enterprise; they have a social and an e-commerce mission and the two are indivisible.

They have built our business on four pillars:
1.    Inspiration and Hope: Every day, they show what people with intellectual disabilities can do when given an opportunity.
2.    Giving Back: They donate 5 percent of their earnings to the Special Olympics and raise money for their charity partners through Awareness and Charity socks.
3.    Socks You Can Love: They offer over 2,300 different socks.
4.    Making It Personal: Every package gets a thank you note from John and some candy.

They opened in December 2016 in temporary space in Huntington Village making home deliveries. Now, they operate from a 6,400 square foot facility in Melville, New York, have created 35 jobs, employ 18 people with differing abilities and ship to every state in the union as and 80 different countries. John and his business have been featured on Fox Business News, Money Magazine, the BBC, ABC-TV, CBS-TV and in many publications. To learn more, go to JohnsCrazySocks.com or email service@johnscrazysocks.com.

The National Down Syndrome Society is the leading human rights organization for all individuals with Down syndrome. NDSS provides state-of-the-art, comprehensive programming to all individuals with Down syndrome and their families with four main areas of programming, which include the National Advocacy & Policy Center, the National Inclusive Health & Sports Program featuring our National Buddy Walk® Program, Community Outreach and Resources and Public Awareness. NDSS envisions a world in which all people with Down syndrome have the opportunity to enhance their quality of life, realize their life aspirations and become valued members of welcoming communities. For more information visit http://www.ndss.org.

About the Helsinki Commission

The Commission on Security and Cooperation in Europe, also known as the U.S. Helsinki Commission, is an independent agency of the U.S. Federal Government. For 40 years, the Commission has monitored compliance with the Helsinki Accords and advanced comprehensive security through promotion of human rights, democracy, and economic, environmental, and military cooperation in the 57-nation OSCE region.