Cigar Advisor Magazine is a digital publication dedicated to providing cigar enthusiasts with entertaining and informative content. Their February 2014 issue's featured cover story is an articly Jon Huber, co-founder of new boutique cigar company Crowned Heads, about the inspiration behind one of his most popular cigars. 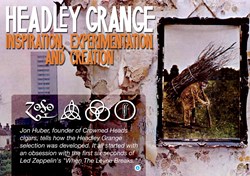 Jon Huber wrote an informative piece for Cigar Advisor Magazine about his inspiration behind the Headley Grange cigars.

There was something about John Bonham’s drums in those six seconds -- ominous, thick, dense, and plodding -- that got under my skin, inside my eardrum, and would not let me go.

The all-new Cigar Advisor is an online cigar magazine that brings a fresh, irreverent, and down-to-earth perspective on all things cigars to thousands of smokers. In addition to educational cigar content and behind-the-scenes cigar industry articles from some of the business’s top names, Cigar Advisor delivers an array of content about a variety of topics of interest to people who enjoy the cigar lifestyle. The magazine also features cigar reviews and ratings submitted by real smokers, and much more. Cigar Advisor Magazine has published an article by Jon Huber, co-founder of Crowned Heads Cigars that tells how the famed rock band's song, "When The Levee Breaks" played a part in developing the cigar. Entitled, "Headley Grange: Inspiration, Experimentation, and Creation," Mr. Huber also describes how the first six seconds of the song led to the blending process and much more.

"There was something about John Bonham’s drums in those six seconds -- ominous, thick, dense, and plodding -- that got under my skin, inside my eardrum, and would not let me go," writes Huber.

Huber recalls he and his partner, Mike Conder making a conference call to Ernesto Perez-Carrillo, Jr., owner of Tabacalera La Alianza, and playing the six second loop from "Levee" to him a few times.

"I want to blend a cigar that tastes how those drums sound," said Huber. "The speaker phone was silent for a moment, then Ernie replied, 'OK...I get it.'...fortunately, Ernie was a drummer in his former life, and got what I was trying to convey: I wanted the flavors to be thick, dense, and heavy."

Huber also talks about the "Ah-ha" moment. "It’s that instant when you taste that particular blend of tobaccos, let it wrap its arms around your taste buds, and you know in your gut that this is IT."

To get the whole story about the birth and success of Crowned Heads' Headley Grange selection, visit CigarAdvisor.com.