Jonathan P. Tomes’s newly released “I am Yosef, Ben Yaakov, Husband of Miryam and Stepfather of the Messiah: A Novel” is an engaging tale of the holy family

“I am Yosef, Ben Yaakov, Husband of Miryam and Stepfather of the Messiah: A Novel” from Christian Faith Publishing author Jonathan P. Tomes is a creative and enjoyable story that explores the what ifs of the holy family based on scriptural insights. 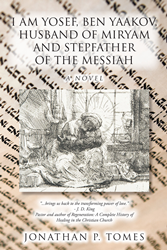 An excerpt from the book shares, “Jonathan Tomes’ imaginatively created tale of the lives of Joseph and Mary from the biblical account in the gospels is very insightful. The narrative holds the reader in suspense from the first chapter to the end of the book. The intellectual structure is also a unique takeaway of the story of Joseph and Mary. —Jack Walter, Pastor of Connections and Family Care, World Revival Church, Kansas City, MO

“A papyrus begins with Yosef’s early life. Yosef tells what it was like to be notified that, as an elderly widower, he must go to Jerusalem where he may be selected to marry a young temple virgin. Not thrilled when chosen, but being unwilling to gainsay Yahweh’s will, he takes her home. He recounts how he felt when he discovered her pregnancy, his disbelief of how she became pregnant, his fear that if he divorces her, she may be stoned, and his acceptance of the Lord’s will. They travel to Bethlehem. Yosef recounts the birth, the appearance of the shepherds, the Magi, and his reaction to learning that they must flee Herod’s murder of the firstborn males. He recounts the trip to Egypt, their stay there, and the return home. He recounts his Jesus’s youth from the circumcision, through the presentation in the temple, to Jesus being missing and the desperate search for him before finding him teaching the temple priests, to his leaving for the wilderness. He accompanies Jesus on his ministries and learns of his miracles. Too old and infirm to travel, Jesus comforts Yosef on his deathbed. The holy family celebrates seder before Yosef’s peaceful death.”

Tomes shares a well-crafted and thoughtful look into the life of the man selected by God to protect and raise the Savior.

Consumers can purchase “I am Yosef, Ben Yaakov, Husband of Miryam and Stepfather of the Messiah: A Novel” at traditional brick & mortar bookstores, or online at Amazon.com, Apple iTunes store, or Barnes and Noble.

For additional information or inquiries about “I am Yosef, Ben Yaakov, Husband of Miryam and Stepfather of the Messiah: A Novel,” contact the Christian Faith Publishing media department at 866-554-0919.