Chairman of Cool Corporation and Tourism Guru Joseph Issa, who backs Jamaica’s famous Blue and John Crow Mountains National Park for inscription on UNESCO’s World Heritage List, says in an interview that the recognition will be a big boost to the island’s tourism business and that of the Maroon community which has legally occupied a section of the Park for nearly three centuries. 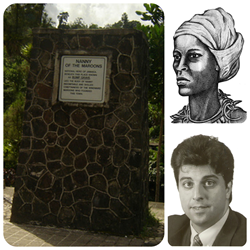 A monument at the John Crow Mountains in memory of Maroon leader and National Heroine, Nanny (top left), located where she is believed to have been buried. Below is Chairman of Cool Corp, Joe Issa.

Getting World Heritage status for any of our many historic, natural and cultural sites is a major boost for the country in terms of tourist arrivals and business opportunities for the local communities

Chairman of Cool Corporation and former vice president of his father’s SuperClubs chain of resorts Joe Issa, says in an interview, he is confident that Jamaica’s renowned Blue and John Crow Mountains National Park (BJCMNP) will be on UNESCO’s World Heritage List, and that this will boost the island’s tourism and provide business opportunities for the Maroons, who have occupied and preserved their way of life there, long before they were given their own lands as part of the 1739 Peace Treaty with the British.

Issa’s statements come as the World Heritage Committee on which Jamaica sits for the first time since last November, begins to evaluate the country’s nomination of the BJCMNP for inscription on the World Heritage List, according to The Gleaner newspaper.

“Getting World Heritage status for any of our many historic, natural and cultural sites is a major boost for the country in terms of tourist arrivals and business opportunities for the local communities.

“But in the case of the Blue and John Crow Mountains National Park there are strong elements of all three which make it a formidable attraction that will change the face of business in the Maroon community,” says Chairman of Cool Corporation and former vice president of his father’s SuperClubs chain of resorts, Joe Issa, in an interview.

An upbeat Issa says the BJCMNP will attract a variety of visitors for whom products, services and facilities will have to be provided.

“Like the Blue Mountains, there will be opportunities to build cabins, a visitor centre, campsites, picnic areas, hiking trails, restaurants and bars, craft shops, boutiques and public conveniences at the John Crow Mountains.

According to UNESCO for a site to be considered for inclusion in the World Heritage List “it must be of outstanding universal value and meet at least one out of ten selection criteria”, which include “natural and cultural”, the mix for which the Park is nominated, Executive Director of the Jamaica Conservation and Development Trust (JCDT) and Manager of BJCMNP, Dr. Susan Otuokon, confirms in an interview.

In terms of the natural factors, JCDT says “the geology, elevation, rainfall and other physical factors have resulted in very high biological diversity in the Park and it is on the WWF/IUCN (1997) List of 200 Globally Important Sites for Plant Biodiversity.”

The forests of the Park are said to be the last of two known habitats of the Giant Swallowtail Butterfly (Papilio homerus), the largest butterfly in the Western Hemisphere and that it is an important haven for many Jamaican birds, including all the endemic species such as the endangered Jamaican Blackbird (Neospar nigerrimus). It is also a winter habitat for many migratory birds.

The JCDT informs that the Park “is also a refuge for Jamaican wildlife including the Jamaican Boa (Epicrates subflavus) and the Jamaican Hutia (Geocapromys brownii), as well as being home to numerous endemic orchids, bromeliads, fern and other plants including many that are on the World Conservation Union (IUCN) Red List.”

As regards the cultural authenticity of the Windward Maroons and in particular the events and their living traditions, the JCDT says these are substantiated by numerous studies and documents, as well as UNESCO’s recognition of the Maroon Heritage of Moore Town as a “Masterpiece of the Oral and Intangible Heritage of Humanity” and is working with the Maroon Council to assist them in conserving this heritage.

In addition it says evidence of the guerrilla warfare they waged with the British militia which ended with the signing of a peace treaty in 1739 is contained in British documents and maps from the eighteenth century.

The UNESCO rules also require nominating countries to be a signatory to the World Heritage Convention, pledging to protect their natural and cultural heritage, which Jamaica has already satisfied with expenditure of some US$1.3 million between 2006 and October 2015, its website at http://www.jcdt.org.jm/projects.html informs.