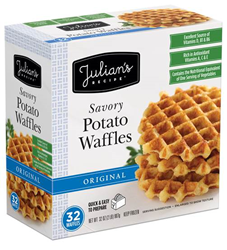 We are thrilled to see frozen waffles in the market using GrandFusion® natural vitamins. Julian’s Recipe is on the right mission with the new Savory Potato Waffles.

Julian’s Recipe, LLC, a European inspired, gourmet waffle, artisan bread and snack company, has announced it is partnering with NutriFusion® to add the essential nutrients from six vegetables to their latest products. The Julian’s Recipe Savory Potato Waffles marks the first product launch with the GrandFusion® vegetable blend for the company. The new potato waffle aims to be a healthier option than traditional potato products like hash browns.

“We are focused on developing more products with “better-for-you” nutritional profiles for people of all ages”, says Founder and R&D lead of Julian’s, Alex Dzieduszycki. “We believe our Savory Potato Waffles will fill an important gap in functional foods, and give people of all ages a healthy, frozen food with a nutraceutical benefit.”

NutriFusion, LLC has been producing fruit and vegetable based nutrient blends for food, beverage, supplement, and pet brands since 2008. The partnership with Julian’s Recipe showcases the uniqueness of the GrandFusion® Six Vegetable Nutrient Blend. With around 100 mg of GrandFusion®, Julian’s is able to deliver 20% RDI of 6 vitamins including vitamin A, vitamin C, vitamin D, vitamin E, vitamin B1 (Thiamin), vitamin B6.

William Grand, Founder and CEO of NutriFusion® had this to say, “We are thrilled to see frozen waffles in the market using GrandFusion® natural vitamins. Julian’s Recipe is on the right mission with the new Savory Potato Waffles. Julian’s Recipe is an innovator and we are excited to see more of their products with nutrients from fruit and vegetables. As more brand partners add our nutrients, we hope to see consumers demand companies to switch from synthetic alternatives.”

To learn more about Julian’s Recipe and NutriFusion® products or to book an interview, contact Eric Dunn at 803.240.0810 or email, eric(at)digerati(dot)marketing

About NutriFusion® – http://www.nutrifusion.com
NutriFusion® was formed in 2008 and is headquartered in Hilton Head, SC and provides the nutrient-rich benefits of fruits and vegetables in everyday food products. NutriFusion® sources only whole, organic, Non-GMO foods to create its concentrated micronutrient and phytonutrient-rich food ingredient blends. GrandFusion®, a patented blend of fruits and/or vegetables can significantly increase the nutritional profile and marketability of food, beverage and supplement products. NutriFusion® uses only fresh food, never synthetic additives, excipients, preservatives, or synthetic ingredients.

About Julian’s Recipe
Julian’s Recipe was founded by Alex Dzieduszycki with the goal of developing European inspired, gourmet foods. Julian’s is launching a new product in Costco, Savory Potato Waffles, to bring nutritious and delicious frozen waffles to families in the United States. Julian’s is pioneering new items with multiple line extensions in development to reach wider audiences from mainstream grocery to club stores.