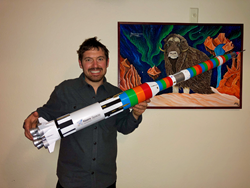 "As long as we have been launching civilian rockets into space from the United States, there has been no software to do this," said another executive with over 30 years of experience in aerospace. Keeni Space will become mission-critical software for enterprises requiring electronic procedures.

Standardizing launch is crucial to the commercial success of space. There are over one hundred companies currently building rockets that will require launch services. The Launch Company is on a mission to create a future where rockets are launched on-demand. This will only be achievable by standardizing launch operations - including launch operations procedures. While providing professional services to numerous aerospace customers, from the Narrow Cape of Alaska to Cape Canaveral, it became clear to the Launch Company that software needs to be developed to facilitate the procedures for testing and launching rockets.

Keeni Space, an Alaska-based company, was born during the Launch Company’s involvement as a startup in the Space Stream of the Creative Destruction Lab (CDL) accelerator program in Toronto. The Space Stream brought together astronauts, mentors, investors and engineers to help entrepreneurs validate their ideas and grow their startups. At the final session of the Space Stream on May 12, 2019, Canadian astronaut and director of the Space Stream, Chris Hadfield, validated and emphasized the importance of digitizing and automating procedures for launch operations of rockets and space vehicles.

“As long as we have been launching civilian rockets into space from the United States, there has been no software to do this,” said another executive with over 30 years of experience in aerospace. Keeni Space will become mission-critical software for enterprises requiring electronic process management for rocket launches and space vehicles, where time is a premium and safety is vital.

Ben Kellie, founder of the Launch Company, partnered with twin brothers Lee Brown and Lucas Brown, co-founders of Geeks in the Woods, and Robb Kulin, a former SpaceX engineer and NASA astronaut applicant, to tackle this challenge. Together, with the support of Lee and Lucas’ startup venture studio, the team built the software platform - Keeni Space - to transform operating procedures into modern, digital workflows.

The Keeni software platform was designed and architected to provide process automation to launch operations, but also to industries beyond space. While the operations for testing and launching the rocket are the most critical, the procedures to support these complex operations are thought about last and often facilitated with paper. There are numerous issues with using paper procedures. They are uncontrolled, cause teams to fall out of sync due to lack of coordination, and make it difficult to meet regulatory compliance.

The first wave of space innovation was pioneered by NASA managing the process end-to-end. The second wave was SpaceX pioneering commercial innovations and others following. The third wave is decentralized innovation that lowers that barriers to access space. Keeni Space is helping lead this third wave by transforming legacy paper processes for launch operations into streamlined digital processes for a future of autonomous rocket launching.