World-renowned motorsports artist Kelly Telfer unveiled original Elvis Presley Artwork featuring the Rock ‘N’ Roll icon and his legendary Pink Cadillac. The event, which took place on Wednesday, November 2, at the Westgate Hotel Las Vegas from 1:00 p.m. to 2:00 p.m, also featured a 1974 Stutz Blackhawk, reportedly owned by Elvis, and now owned by of History Channel’s Counting Cars host Danny “The Count” Koker who made a special appearance. Besides the car, the press conference also featured the historic RCA 44BX mic which was used by Elvis during his Louisiana Hayride days. Wayne Carini from Chasing Classic Cars was also in attendance. 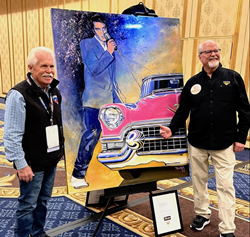 Wayne Carini, host of the Chasing Classic Cars TV series , and artist Kelly Telfer pose next to Telfer’s original fine art painting: Elvis and His Cars at the official unveiling during SEMA 2022

Working on this project was truly inspiring. From the historical significance of the images and items I sourced, to seeing Elvis’ car in person and being able to speak into the same microphone that the King himself used – it’s hard to put into words the magic that surrounded the entire day.

World-renowned motorsports artist Kelly Telfer unveiled his latest original artwork honoring Elvis Presley yesterday, Wednesday, November 2, during SEMA, at the Westgate Hotel Las Vegas. The event titled “Telfer Design: Elvis Presley and His Cars,” took place from 1:00 p.m. to 2:00 p.m. and featured two historic items from the King of Rock: the historic RCA 44BX mic which was used by Elvis during his Louisiana Hayride days, and a 1974 Stutz Blackhawk that was once reportedly owned by Presley. The car’s appearance was made possible by current owner and special guest Danny Koker, host of the History Channel show Counting Cars. Wayne Carini from the TV Series Chasing Classic Cars was also in attendance.

“Working on this project was truly inspiring. From the historical significance of the images and items I sourced, to seeing Elvis’ car in person and being able to speak into the same microphone that the King himself used – it’s hard to put into words the magic that surrounded the entire day,” said Telfer.

The original painting from the event “Elvis and His Cars,” will be auctioned off at a later date with all proceeds going to the Rockabilly Hall of Fame Museum.

The Elvis image used in Kelly Telfer’s original painting was sourced from an image taken by Shreveport Journal photographer, Jack Barham on December 15,1956 at the Hirsch Youth Building in Shreveport during Presley’s final Louisiana Hayride show. This image was licensed for use by Telfer from the Louisiana Hayride Archives administered by the Rockabilly Hall of Fame Museum.

The vehicle used in the unveiled painting was Presley’s Pink Cadillac, which was a Fleetwood Series 60 and Elvis’ first ever Cadillac. Telfer plans to produce additional paintings that may include Presley’s 1956 Purple Cadillac, 1971 Stutz Bearcat, and 1971 Yellow De Tomaso Pantera.

“Our relationship with Kelly arrived unexpectedly and this celebration at SEMA was a key hallmark of a marriage of Rockabilly, fast cars and fine art. We are excited for this new relationship and look forward to the ongoing series with Kelly as he helps us present Rockabilly to younger generations. It's all cool, baby!” said Jeffrey Cole, president of Destin Music Group and executive director of the Rockabilly Hall of Fame Museum.

“The presence of the past was felt at the unveiling of Kelly Telfer's original 'Elvis & His Cars' painting. Kelly capitalized on a strong theme of the SEMA show: icons of yesteryear brought forward and presented to younger generations. Well done, Kelly!” said Joey Kent, VP and curator of the Rockabilly Hall of Fame Museum and the owner of the Louisiana Hayride Archives.

Elvis premiered on the Hayride on October 16, 1954, just two weeks after failing to impress the audience at the Grand Ole Opry. The Rock ‘N’ Roll star called the Hayride home for the next eighteen months. The show was carried on the radio in 38 states and featured on Armed Forces Radio overseas and was key to launching Presley’s career into the stratosphere.

Besides its famed use by Elvis during his Louisiana Hayride days, the RCA 44BX microphone which was in service at the unveiling, was also used by the late Jerry Lee Lewis to audition for Hayride. During the event, Cole spoke fondly of Lewis’ impact and his first Sun Records single Crazy Arms.

The microphone was an important in-studio fixture at KWKH in Shreveport, Louisiana and on the historic Louisiana Hayride stage show that launched the careers of Hank Williams, Elvis, Johnny Cash, George Jones, Kitty Wells and a host of others. Elvis recorded demo tracks for RCA using this microphone; Ike & Tina Turner laid down a few tracks as well. Dale Hawkins also used the mic to record his smash hit Suzie Q, and John Fred & The Playboys recorded Judy In Disguise with it.

“During the press conference we had Elvis cars, Elvis paintings, and we were at the Westgate Hotel where Elvis lived; it truly felt like Elvis was in the room with us!” said Charles McPeak, advisory board member of the Rockabilly Hall of Fame Museum.

The artist will also be at SEMA during the entire run of the event in booth #10325 with prints of the original artwork available for sale starting at $30.00.

Although best known for his fast-moving automotive paintings and posters, Telfer’s art encompasses more than machines. He captures the people and the history of racing and car collecting in his most celebrated paintings. In March of 2022, Kelly’s portrait of Mario Andretti and his history in racing sold through RM Sotheby’s for $138,000, which we are told is a record for the work of a living motorsports artist at auction. All proceeds were donated to charity. His portraits of Butzi Porsche, Wendell Scott, George Follmer and Parnelli Jones have also earned critical acclaim. And, he’s excited to have been chosen by the Rockabilly Hall of Fame Museum to do a series of paintings of Elvis Presley and his iconic collection of cars.

In 2022, Kelly Telfer was Official Artist in for the WeatherTech Raceway Rolex Motorsports Reunion, the Hyundai Monterey Sports Car Championship IMSA race, the Porsche Parade, the Porsche Club of America Werks Reunion, and the inaugural St Louis NASCAR Race. Telfer’s art is on permanent exhibit at The Speedway Motors Museum of American Speed, in Lincoln, NE, The AACA Museum in Hershey, PA and his art is available at the Petersen Automotive Museum in Los Angeles, and the LeMay America’s Car Museum in Tacoma, WA.

The Ultimate Mic Drop by Kelly TelferOne of two paintings unveiled during SEMA at the Westgate Hotel on Wednesday, November 2, 2022. The microphone used as inspiration for the piece is a RCA 44BX mic used by Elvis Presley during his Louisiana Hayride days. This microphone was also in use during the press conference

The Kelly Telfer booth at SEMA 2022Booth #10325 at SEMA, art prints of the original artwork available for sale starting at $30.00

Wayne Carini from Chasing Classic Cars and artist Kelly Telfer pose next to the original “Elvis and His Cars” painting at the press conference during SEMA 2022The original painting from the event “Elvis and His Cars,” will be auctioned off at a later date with all proceeds going to the Rockabilly Hall of Fame Museum.