AppsGeyser Reveals the Tricks To Getting 1000 Daily Downloads 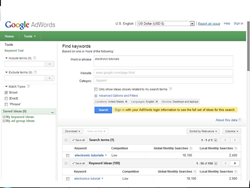 The AppsGeyser team suggested that I changed my keywords.

Creating an Android app with AppsGeyser’s free Android app tools is simple but ensuring high traffic is not as simple, until now. AppsGeyser has been looking at ways in which they can help app makers ensure that they receive high download rates that will convert into Android app success. With competition in the app market so fierce ensuring that an app is visible to potential app users is vital and now the secret to high visibility has been revealed, it is using the right keywords.

"I have created a few apps and placed them on GooglePlay,” Jeremy Jakes told us. “But I couldn’t understand why I was simply getting no downloads until the AppsGeyser team suggested that I changed my keywords.”

“If an app maker fails to research keywords effectively they will find that their app struggles to bring any downloads,” explains Vasily Salomatov. “We suggest to all app makers that they upload their app a few times using different keywords to see which app begins to succeed and then proceed to upgrade and work with this app.”

AppsGeyser, launched in February 2011, is now the biggest Free Android App Builder on the market. AppsGeyser’s popularity has risen by enabling users to create apps with ease for Android devices from any web content in under five minutes. AppsGeyser has seen more than 955,000 apps created on its platform. There have been more than 700 million downloads of its apps.