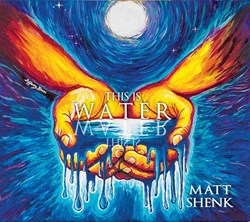 I couldn't be more thankful for the love and support from those fans that believed in me.

Back in March, singer songwriter Matt Shenk launched his Kickstarter campaign "Let's Make A Record Together." The Orlando native hoped to raise enough funds to produce what he called his “dream album.” The successful campaign was heavily supported by fans who pledged money in exchange for perks including CDs, T-shirts, and concert tickets. The effort paid off, well surpassing the “all or nothing” goal and raised $25,000 in just 45 days. “The experience was so humbling and empowering,” Shenk said. “I couldn't be more thankful for the love and support from those fans that believed in me.” What evolved was a 6 month recording endeavor of "This Is Water" with record producers Evan Coffman and Brock Berryhill at Starlight Studios. The team introduced new arrangements for Shenk that included bringing in a horn section, string players, and even a gospel choir to achieve the sound Matt wanted. The album offers a collection of tunes that both musically and lyrically touch the heart,mind, and soul. There is an honesty about Shenk, and his music immediately invites the listener to embrace the intimate emotions of each track . From the stripped down acoustic track "Sweeping Up Memories" to the full production of "Sometimes" which includes a killer Horn Section and jaw dropping Gospel Choir, this album has a little bit of everything and a whole lot of passion. Starting with a handful of grass roots believers, This Is Water" flourished from a dream into a professionally produced, well crafted, 12 track gem that is memorable from beginning to end. Pre release feedback of the album has been overwhelmingly positive and has already caught the attention of several music publishers and industry leaders. Looking back, Shenk said that his, “sole objective was to make a great album that everyone involved could be proud of,...and I think we accomplished that." You can purchase “This is Water” at http://mattshenk.bandcamp.com/album/this-is-water-2 as well as on Itunes, Amazon, and many other retailers.