Complain About Bed Bugs Gets Woman Kicked Out, My Cleaning Products Suggests a Spray to Kill Bed Bugs Right Away

A woman alleged that a shelter got her evicted after complaining about bed bugs, said a report. In connection with it, My Cleaning Products suggested a bed bug spray to help the public kill bed bugs fast and safe. 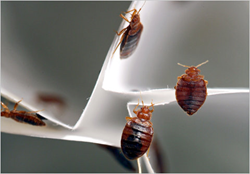 As Bed Bug Bully contains no harsh chemicals and could kill even the pest's eggs and nymphs, it pointed out that it is both effective and safe.

For speaking out about a bed bug problem, a woman in Houston was allegedly kicked out of the shelter she was staying in. In connection with it, My Cleaning Products recommended a pesticide-exempt spray to help the public kill bed bugs fast and safe.

According to a report from kens5.com posted on March 26, 2014, the woman, who asked not to be named, left her abusive husband and stayed in a shelter for battered women and children in the state. However, it relayed that on Tuesday night, after just two weeks since she and her children came, they were kicked out.

As claimed by the mother of three, the critters feasted on her and her kids while they were in the facility, the report shared. And it was when she complained about it, as she claimed, that they were evicted, it added.

However, the report relayed that the shelter stated they would never evict a family for complaining about the critters. Regarding the matter of bed bug presence though, it related that some sources said the facility has dealt with them from time to time.

Below is an excerpt from the post Bed Bug Complain Led to a Woman's Eviction by My Cleaning Products.

“A woman in Houston hoped to start anew in a shelter, particularly for battered women and children, with her kids after leaving her abusive husband. However, bed bugs spoiled her plan.

In her two-week stay in the facility, she said that the pesky creatures feasted on her, her daughter and her two sons. Her daughter even shared that the bed bug bites she got were all the way down to her feet.”

MCP said that shelters as the one reported, along with houses and apartments, are the most-vulnerable to bed bug presence. The reason, it stated, is the high-traffic of people in them everyday.

Because of that and the fact that bed bugs are sneaky, My Cleaning Products asserted that the public must then be wary of any bed bug sign. Those hints of their presence are the keys to eliminating them early, it said.

Nonetheless, in order kill bed bugs promptly, MCP cited that a help would be needed. And that help, it said, is best provided by Bed Bug Bully, an organic-based bed bug spray.

As Bed Bug Bully contains no harsh chemicals and could kill even the pest's eggs and nymphs, it pointed out that it is both effective and safe. That, it asserted, makes it the best help anyone could get.

In addition, the company shared that it is even on EPA's FIFRA 25(b) list for being a pesticide-exempt. It said that numerous hotels, hospitals and pest-control have also testified that it truly works.

To personally experience its benefits, MCP invites everyone to get a Bed Bug Bully Complimentary Sample at mycleaningproducts.com.