Officials Confirm Presence of Bed Bugs in NC Marine Base, My Cleaning Products Suggests a Spray to Kill Bed Bugs Right Away

Bed bugs infested a Marine base in North Carolina, said a report. In order to help anyone dealing with those critters, My Cleaning Products suggested a spray to kill bed bugs fast and safe. 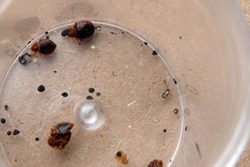 Bed Bug Bully is organic-based. It said that it's even on EPA's FIFRA 25(b) list, so, people could rest assured that it is safe.

Bed bugs were reportedly infesting a Marine Corps base in North Carolina. The website marinecorpstimes.com relayed the details of it on its post published on April 10, 2014. In connection with it, My Cleaning Products recommended a pesticide-exempt bed bug spray to help anyone with the same problem kill bed bugs right away.

According to the post, the crawlies started troubling the Marine Corps Air Station Cherry Point in August last year. And as it detailed, since then, there were already multiple confirmed reports of their infestation. The latest of which, it added, was just last Wednesday.

The report related that the base's problem with the critters was brought out by one Marine, who was a victim of the pesky bugs. It shared that he requested to remain anonymous but said that he was left to spend his own money for his room's clean up after he reported his encounters with the pests.

But in response to the claim, officials said in the report that they are more hands-on when it comes to eliminating bed bugs than what the Marine indicated.

Here is an excerpt from the post Bed Bugs Infest Marine Corps Base by My Cleaning Products.

“Bed bugs are some of the smallest creatures that you may ever come across with. But don't be fooled by their size as they could cause a huge ruckus almost anywhere. In fact, they were even able to get past the defenses of a Marine Corps base in North Carolina.

The bed bug problem in the said base was publicized when one sergeant talked about it in the Marine Corps Times. And following the release of the story, officials with Marine Corps Air Station Cherry Point confirmed the infestation of the critters.”

My Cleaning Products commented that this news proves that bed bugs really choose no place to infest. It added that this, as well, shows how sneaky they are that they were even able to get past the Marines' “defenses.”

Considering those things, MCP stated that everyone must be always ready to kill bed bugs. Although there are preventive measures one could take to decrease the possibility of their infestation, it stressed that those crawlies are sneaky. Hence, it said that it would be best to be always prepared.

To be ready to eliminate those bugs, the company stated that would need a bed bug spray. However, it reminded the public that most of the pesticides today contain harmful chemicals. And so, for a truly safe yet effective product, it advised the use of Bed Bug Bully instead.

As it cited, Bed Bug Bully is organic-based. It said that it's even on EPA's FIFRA 25(b) list, so, people could rest assured that it is safe. But even in the absence of strong chemicals, it added that it could kill those crawlies and even their eggs and nymphs fast.

To prove those benefits true, MCP invites everyone to try the Bed Bug Bully Complimentary Sample. It shared that it is available at mycleaningproducts.com.