Bed bugs were reportedly spotted in a motel in east San Antonio. In connection with it, My Cleaning Products recommended a pesticide-exempt bed bug spray to help the public kill bed bugs fast and safely. 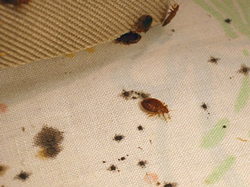 ...it[Bed Bug Bully] could kill those crawlies and even their eggs and nymphs in seconds even though it got no harsh chemicals in its content.

In San Antonio, a customer of one motel complained of being bitten by bed bugs. In connection with it, My Cleaning Products recommended a pesticide-exempt bed bug spray in order to help the public kill bed bugs fast.

A report from mysanantonio.com dated April 10, 2014 identified the guest as Tony Sabbs. Based on his statement, it related that he was bitten on the second night of his stay at a motel in the east of the city.

Sabbs spotted the critters on his arm and bed, shared the report. And following that, he complained to the housekeepers of the motel and its front desk. In response, the management closed the room and got it inspected and treated.

Here is an excerpt from the post Bed Bugs Found in San Antonio Motel by My Cleaning Products.

“As you know, bed bugs are very common in hotels. So many people have already reported being bitten by them while staying in various accommodations across the country. Recently, Tony Sabbs became one of them.

Staying in one motel on the east side of San Antonio, Sabbs said that he was bitten by the critters on his second night at the place. He detailed that he spotted them crawling on his arm and on his bed.”

According to My Cleaning Product, bed bugs are really common in places with a high turnover of people every day. And so, it commented that besides hotels and motels, residences are vulnerable to their presence as well.

Because of that and the fact that bed bugs are sneaky, it advised the public to prepare a bed bug spray so one could exterminate bed bugs promptly. That way, the worst of their effects could be prevented, it stated.

However, out of all the bed bug sprays, MCP only recommended the use of Bed Bug Bully. It said it is unlike all the others in the market and is the best pick.

As it explained, that's practically because it could kill those crawlies and even their eggs and nymphs in seconds even though it has no harsh chemicals in its content. That, it cited, makes it safe for everyone's health. In addition, it pointed that it is already in EPA's FIFRA 25(b) list.

To try it out, MCP invites everyone to get the Bed Bug Bully Complimentary Sample at mycleaningproducts.com.