Bed bugs were reportedly confirmed in two Princetone University student housings. To help the public kill bed bugs without the use of harmful chemicals, My Cleaning Products suggested the switch to Bed Bug Bully. 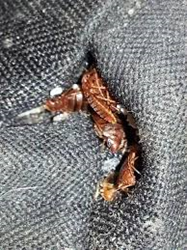 The company explained that unlike most of the pesticides today, it [Bed Bug Bully] contains no harsh chemicals. That, it cited, makes the whole process safe.

The presence of bed bugs was confirmed in Princeton University's two student housings. In connection with it, My Cleaning Products recommended the use of an organic-based product to kill bed bugs effectively without endangering the health of anybody.

According to a report from the dailyprincetonian.com dated April 15, 2014, the two housings affected were the Holder Hall and Forbes College. Nonetheless, it stated that the students were only informed of the bed bug presence in the former.

The creatures had infested Holder Hall three times already, relayed the report. It detailed that they happened on March 22, March 25 and March 31. Meanwhile, the confirmed bed bug incident in Forbes College, it shared, occurred on April 10.

The post said that the affected rooms in Holder Hall were already chemically treated. As it related, the rooms adjacent to them were also being monitored. Meanwhile, the affected area in the Forbes College will be treated this week, it added.

Below is an excerpt from the post Bed Bugs Attack Student Housings in Princeton University by My Cleaning Products.

"The pesky bed bugs are a big problem at two of Princeton University's student housings. And as a result of their presence, residents were moved out of the building."

"Holder Hall and Forbes College are the two areas in the campus troubled by the crawlies. In Holder Hall, three bed bug cases were already reported on March 22, March 25 and March 31. Meanwhile, a bed bug incident in Forbes College on April 10 was recently confirmed."

My Cleaning Products said one of the things that makes bed bugs such a big problem is the fact that they choose no place to infest. It stated that they could start an infestation anywhere so long as there is someone they could feed on.

Because of that, it stated that houses are highly susceptible to bed bug presence. However, it stated that if one got a prepared bed bug spray, he or she could prevent a major infestation of those critters.

Nonetheless, not just any product won't do, MCP stressed. Out of all the bed bug sprays in the market, it said that the public must go for one that is pesticide-exempt as Bed Bug Bully to protect everybody's health.

The company explained that unlike most of the pesticides today, it contains no harsh chemicals. That, it cited, makes the whole process safe.

In addition, it also assured that the bed bug spray is effective - able to kill bed bugs in just seconds. And it works not just on the adult of their species, it stated, but also on their eggs and nymphs.

To try it, MCP invites everyone to visit its website at mycleaningproducts.com and get the Bed Bug Bully Complimentary Sample.