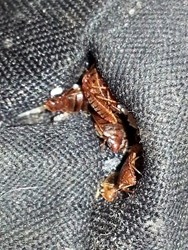 Bed Bug Bully was already proven to kill bed bugs effectively by hotels, hospitals and pest-control companies. With its organic ingredients and pesticide-exempt characteristic...it is also safe for health and the environment...

Bed bugs re-infested a San Luis Obispo homeless shelter. And according to a report from sanluisobispo.com posted on September 03, 2013, it has caused the facility to shut down for the third time already since its first encounter with the pests in July. In response to it, My Cleaning Products shared some tips to effectively kill bed bugs right and to safely prevent their comeback.

As the report determined, that homeless shelter re-invaded by the blood-feeding crawlies was the Maxine Lewis Memorial Shelter, My Cleaning Products related. This recent infestation, it detailed, was discovered in its 22-bed room for men at the back of the facility.

Because of the infestation, it was said in the report that the management was forced to close half of the shelter, shared MCP. It would continue to allow people to stay at the remaining 28 non-affected beds, it relayed.

Based on the report, egg and adult bed bugs were particularly found in the wooden bunks of the affected room, MCP related. But because 25 new metal bed bunks could cost around $50,000, Dee Torres, homeless services coordinator for Community Action Partnership of San Luis Obispo County, hinted that they would not be getting replacements, it added. Nonetheless, it shared that more than $20,000 was already spent by the facility for bed bug treatment.

Below is an excerpt from the post Bed Bugs Return to Maxine Lewis by My Cleaning Products.

“It was in July just this year when Maxine Lewis Memorial Shelter had its first encounter with the tiny blood-feeding bed bugs. Back then, the facility had to transfer its clients to resolve the problem. But even after the steps taken, its seems that the pests are not done yet.

Recently, the said facility was again infested by the vampire-like crawlies. As a result, the management was forced to shut down half of the shelter indefinitely.”

My Cleaning Products said that bed bugs could be introduced to a place time and again. That's the reason why their infestation could repeat several times despite an effective bed bug treatment.

Because of that, MCP advised everyone not to stop implementing steps to prevent bed bugs. It also stressed that everybody must always be ready to kill bed bugs to avoid more of their negative effects and costly professional exterminator's help.

To be prepared to kill those crawlies is to have a bed bug spray ready, said MCP. However, of the many sprays for bed bugs available today, it asserted that Bed Bug Bully is the best. And as it reasoned, that's because the product is both effective and safe.

As it shared, Bed Bug Bully was already proven to kill bed bugs effectively by hotels, hospitals and pest-control companies. With its organic ingredients and pesticide-exempt characteristic, it added that it is also safe for health and the environment that EPA has even classified it under FIFRA 25(b).

To additionally prove those benefits true, it announced as well that it would be giving out samples of it. And as it detailed, a Bed Bug Bully Complimentary Sample is available for anyone who wants one at MyCleaningProducts.com.