Bed bugs in Wisconsin reportedly increased since the past two to three years. So, to help the residents, My Cleaning Products shared a method to kill bed bugs fast, easy and safe. 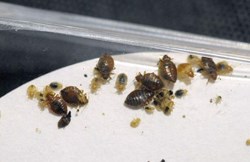 Considering that Bed Bug Bully is pesticide-exempt, the company said that it is the best bed bug spray one could purchase.

Bed bugs are prevalent across the country. And based on a report from foxnews.com, Wisconsin was one of those states enduring an overwhelming surge of them. In response to it, My Cleaning Products introduced a new method to kill bed bugs to the residents.

According to the report, which was posted on September 02, 2013, Wisconsin health officials confirmed the rise of bed bugs themselves, My Cleaning Products stated. One of them was Dan Koralewski, a community health environmentalist in West Allis, it shared. He said, it detailed, that these past two years, they get two-three calls a day about the vampire-like pests.

Another health official, Paul Biedrzycki, director of disease control and environmental health for Milwaukee Health Department, stated in the report that there is indeed a marked increase of bed bug reports in the state, MCP related. However, though they receive calls and give advises about the pests, he cleared that enforcing bed bug elimination was not under their jurisdiction but of Department of Neighborhood Services.

Read more about Bed Bugs Rising in Wisconsin by My Cleaning Products.

“For ten years or more, bed bugs have been causing a fuss across the country. And lately, it was Wisconsin that has been feeling their overwhelmingly disturbing and increasing presence.

According to Dan Koralewski, a community health environmentalist in West Allis, sometimes, they even get up to three calls a day about the small but terrible creatures. And as he added, that's not just happening in West Allis but also in Wauwatosa, Greenfield and Milwaukee.”

My Cleaning Products said that bed bugs' ability to hitchhike unnoticed is basically what makes them so widespread. And because of that, it advised the public to be keen with their preventive steps. Additionally, it encouraged them to have a bed bug spray prepared.

With a bed bug spray ready, MCP stated that one could kill bed bugs easily and promptly. However, it said that the public should opt for a product that is safe to protect health.

Considering that Bed Bug Bully is pesticide-exempt, the company said that it is the best bed bug spray one could purchase. It detailed that it is made with organic ingredients, so, it is safe as it leaves no harmful residues behind. As a result, no evacuation is also necessary when it is sprayed, it added.

When it comes to effectiveness, MCP assured as well that Bed Bug Bully works. It said that hotels, hospitals and even pest-control companies had already proven that it kills bed bugs effectively.

And as it stated, anyone else could also experience those benefits. To test it, it relayed that a Bed Bug Complimentary Sample is available for everyone at MyCleaningProducts.com.