Bed bugs reportedly found in a movie theater in Wisconsin. My Cleaning Products suggested a pesticide-exempt product to kill bed bugs fast and prevent their massive infestation in houses. 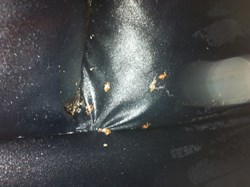 Bed Bug Bully is organic-based and hotels, hospitals and pest-control companies have already proven that it works.

The small but terrible bed bugs were recently sighted in a Wisconsin movie house. News website cbs58.com related the details of the said incident on its post dated October 17, 2013. In connection with it, My Cleaning Products shared some tips how to kill bed bugs quick and avoid the massive infestation of the crawlies.

As determined in the report, the pests were found earlier this month in the movie theater at Mayfair Mall in Wauwatosa, shared My Cleaning Products. It detailed that they particularly affected three of its rows of seats.

The discovery of the critters, based on the report, started from a single bed bug bite, stated My Cleaning Products. As it said, it then prompted a treatment from AMC, which was the company operating the movie house. Since then, the company said that no other bed bug cases were reported in the facility, it shared additionally.

Here is an excerpt from the post Bed Bugs Found in Wisconsin Movie House.

“Bed bugs are very common house pests. However, they aren't exclusive in residences. You could now pick them up anywhere. And that includes even movie theaters.

Yes, you read it right. Those little critters are now pestering even movie houses. And based on a report, that of Mayfair Mall in Wauwatosa was one of the places they just recently infested.”

According to MCP, the reported discovery of bed bugs in a movie house was a clear indication of the pests' prevalence. That meant, it is now more probable for people to pick them up, it stated. Given that, it said that everyone must learn how to be a step ahead of those critters. And to do that, along with implementing routine inspection, it emphasized that one must also prepare a bed bug spray.

With a ready bed bug spray, MCP said that anyone could implement an immediate bed bug treatment. That, it cited, prevents the insects from multiplying and causing more physical and financial problems.

However, it pointed out that most of the insecticides today contain harsh chemical ingredients. So, instead of using any of them, it said that it's better for everybody to kill bed bugs with the pesticide-exempt Bed Bug Bully.

The company stated that Bed Bug Bully is organic-based and hotels, hospitals and pest-control companies have already proven that it works. Moreover, it is already in EPA's FIFRA 25(b) list, it said, And so, one could rest assured of its safety and effectiveness, it concluded.

But, to experience those benefits themselves, MCP encouraged the public to try the samples of it. It shared that anyone could get on of it – Bed Bug Bully Complimentary Sample – at MyCleaningProducts.com.