Inspection reportedly found mold in Webber International University. To help anyone with the same problem, My Cleaning Products recommended the use of Molderizer to kill mold fast, easy and safe. 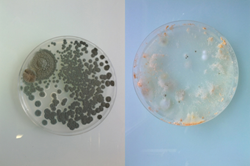 ...Molderizer is a very special formula that changes the DNA make-up of the spores. That, it said, makes it truly effective not just in killing the spores. As it stated, it also prevents their re-growth for up to four months.

An international school at Babson Park in Florida was found to have mold. In a report from theledger.com, it was said that the fungus was discovered after the inspection of the Health Department. In connection with it, My Cleaning Products recommended to the public the use of Molderizer as it asserted that it could help anyone kill mold promptly.

The report was published on June 10, 2014. And as referred on it, Webber International University was particularly the campus with that mold issue.

The school's Grace Hall and Camilla Hall were the two dormitories that students complained to contain mold, relayed the report. However, it shared that the Health Department only inspected the former. In addition, it related that the department's environmental supervisor, John Cook, said he only found a small amount of it in the place.

Nonetheless, the school denied that there is a mold problem in the campus.

Here is a part of the post about Mold in Webber International University by My Cleaning Products.

“Mold is not uncommon in school dormitories. And recently, it has been a problem at Webber International University.

On May 8, a complaint was made regarding the spores' presence at the school's Grace Hall. It prompted the Health Department to take action and implement an inspection. However, John Cook, an environmental supervisor of the department, stated that only a small amount of mold was found in the first floor bathroom of the building. Nonetheless, some students and an employee contrasted the finding.”

According to My Cleaning Products, some mold types are more toxic than the others. However, it stated that all is a danger to health as they could trigger asthma attacks and allergies.

Because of that, MCP stressed the need to kill mold quick. Doing so, it said, will prevent its worse effects on health and finances.

However, the company said that it wouldn't be easy to do that. As it cited, long hours of scrubbing might be needed to get rid of the fungus completely. But it added that it's a different story with the use of mold removal product called Molderizer. It pointed out that it could make the whole process much easier, faster and safer to complete.

The company explained that Molderizer is a very special formula that changes the DNA make-up of the spores. That, it said, makes it truly effective not just in killing the spores. As it stated, it also prevents their re-growth for up to four months.

In addition, MCP emphasized that Molderizer is organic-based. And being one, it stated that it contains no harsh chemical making it safe for everybody's health.

To try it, the company invites everyone to get the Molderizer Complimentary Sample at mycleaningproducts.com.